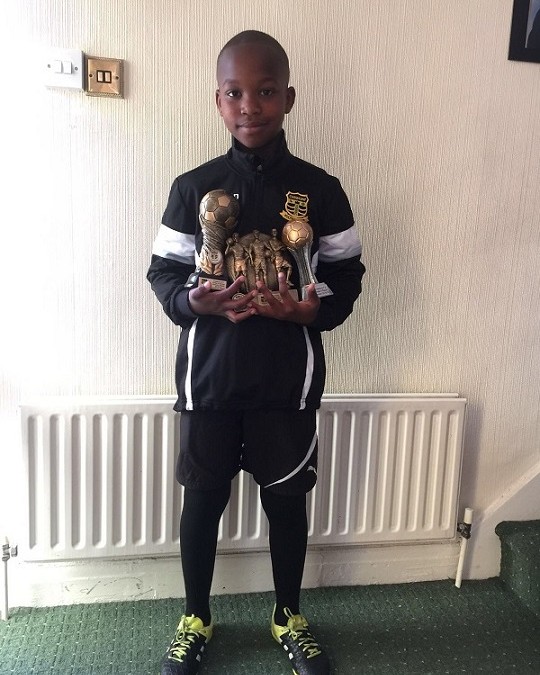 Dutch born UK based and of Sierra Leonean parentage, Sanusi Jabbie has been overwhelmingly voted Best player at his Cheshunt Football Club U-9 team over the weekend.

The lad was also voted Player’s player and Parent’s player.

Sanusi who wears the No. 6 jersey and also captain’s his side received the triple accolades at his club’s end of season presentation ceremony after been voted by the coaches, fellow players and parents to win the awards.

This recognition, according to his proud dad came in barely two years after the defensive midfielder who idolises Mamadou Sahkor of Liverpool and dreams of one day playing for Tottenham or Liverpool in the English premiership joined the youth side of Cheshunt.

Speaking after the award, Sanusi who was over the moon said he was pleasantly surprised. “I was not expecting to grab all three awards at the same time.” His mum was speechless. His dad said he was honored and proud of his son’s achievements and: “I feel like my effort is not going in vain.”

Asked which country of the three he would like to play for if he turns out to be a successful player, the prodigy said it is too early for him now to make a decision.

“I want to first of all concentrate on improving my skills as a footballer and when that time comes for me to choose, I will actively consider mama Salone,” he said with a broad smile.

Cheshunt is an English association football club based in the town of Cheshunt, Hertfordshire. Its senior team is currently playing in the Isthmian League Division One North.