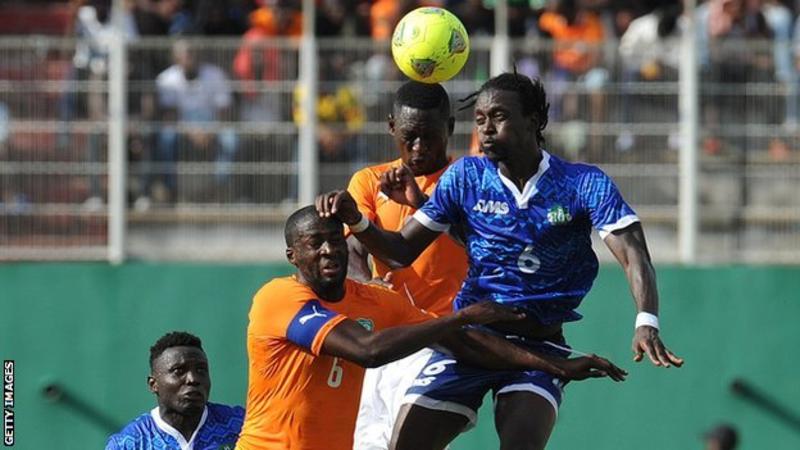 Sierra Leone will qualify for the Africa Cup of Nations for the first time in 20 years if they beat Ivory Coast on Saturday.

But a point for Ivory Coast from the final Group I match would secure their place in Gabon next year.

The Leone Stars, who sit 19 places below Ivory Coast in the African rankings, have been in Ghana to prepare for the game in order to avoid pressure from their fans at home.

“My squad includes many young footballers who have never competed at the Nations Cup and tackling Ivory Coast is a massive challenge for them,” Sierra Leone coach Sellas Tetteh said.

“All I am asking of them is that they play to their limit and when the final whistle blows they can look at each other and know they did their country proud.”

The teams drew 0-0 first in their first Group I encounter last year in a match moved from Sierra Leone to Nigeria because of the Ebola virus.

Ivory Coast will be eager to avoid a shock defeat that would end their defence of the title they won in Equatorial Guinea.

But they will be without Paris Saint-Germain full-back Serge Aurier, who has a heel injury, and Salomon Kalou of German Bundesliga outfit Hertha Berlin, who is mourning the death of his father and an aunt.

Midfielder Toure, not a first choice since the close-season arrival of manager Pep Guardiola, last played for his country in the 2015 Cup of Nations final 19 months ago.

Bony, who has joined Stoke City on a season-long loan, is missing from an attack that does have a Premier League presence in the shape of Max Alain Gradel from Bournemouth.

Democratic Republic of Congo hold a two-point lead over neighbours Central African Republic so a draw before an expected 80,000 Kinshasa crowd will ensure the hosts progress from Group B.

If Burkina Faso and Uganda use home advantage to defeat Botswana and the Comoros respectively, both will secure finals places.

The Burkinabe will top the standings and the Ugandans will claim a place for the first time since 1978 as one of the best two runners-up.

Group A is the most intriguing with leaders Liberia,Tunisia (10 points each) and Claude Le Roy-coached Togo (eight) all contenders for top spot.

A win for Tunisia or Liberia in Monastir will settle the issue, but if that match ends goalless, Togo can sneak through provided they overcome whipping boys Djibouti in Lome.

Other countries with mathematical chances of qualifying as one of the best two runners-up include Cape Verde,Ethiopia,Mauritania and Swaziland.

The Cup of Nations draw is scheduled for 19 October in Libreville and the tournament will be played between 14 January and 5 February.