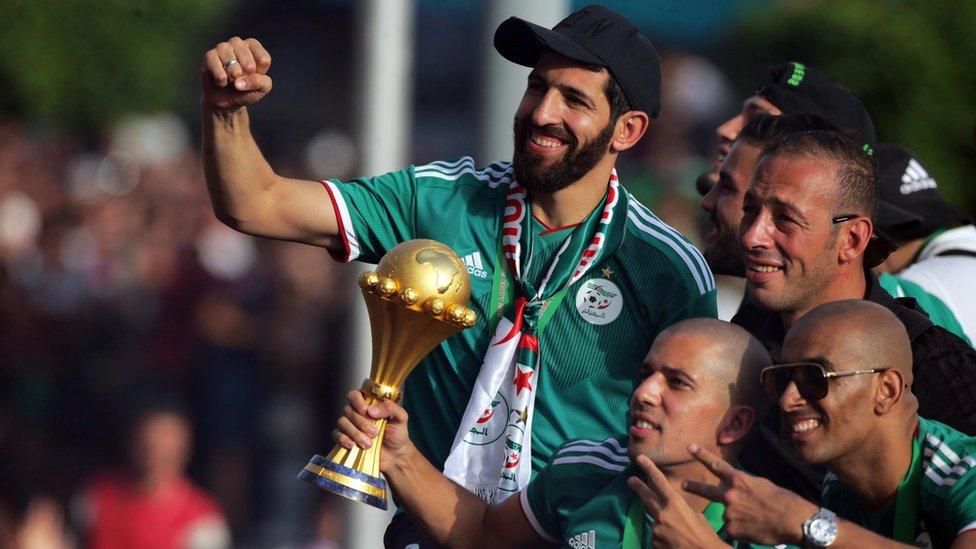 The 2021 Africa Cup of Nations has been postponed to January 2022 by the Confederation of African Football (Caf) as a result of the coronavirus pandemic, while the women’s version of the tournament has been cancelled.

The men’s tournament had been set to take place in January next year.

Elsewhere, the African Nations Championship (Chan), which should have been played in April, will now take place in January 2021.

Cameroon is to host both competitions.

“Health is our number one priority. We must remain vigilant,” Caf president Ahmad Ahmad said in a news conference announcing the move.

The decision means the biannual tournament will now be in the same year as the 2022 World Cup – something that last happened in 2010.

It was moved to odd-numbered years in 2013 – that year’s tournament coming only a year after the previous one – to avoid such clashes, which risked disadvantaging African teams at the World Cup by giving them such an extended season of competition.

Traditionally held in January, the most recent Africa Cup of Nations, in 2019, was moved to the summer in an effort to avoid clashing with the major European league competitions.

This was meant to be the case for the Cameroon tournament as well, but that was then changed back to January owing to climate conditions in the country and a potential clash with the Club World Cup.

The move means that defending Premier League champions Liverpool will play all of next season without losing their key strike force of Senegal’s Sadio Mane and Egypt’s Mohamed Salah to international duty.

“I think this is a wise decision because time is very short now and they could not postpone to the summer,” Nigeria coach Gernot Rohr told BBC Sport Africa.

“I can understand this decision – we have more time now to prepare our young boys. It is not all bad.

“There is a positive side in all this and we have time for some friendlies and also for the beginning of the World Cup qualifiers – normally we will begin in November with this, and I think we can follow the plan and still have time to the Afcon qualifiers starting in October, so it is a wise decision and it will be a big year in 2022.”

Meanwhile the cancellation of the women’s Africa Cup of Nations comes as little surprise given the tournament had no host, while not one qualifier had been played.

There was a boost for the women’s game however with the launch of a new Women’s Champions League for Africa in 2021.

Analysis – Relief for European clubs but an exhausting 2022

With the uncertainty as to the pandemic situation in six months’ time, it always looked impossible for the Cup of Nations to take place in January and February next year.

That is especially the case when you consider that the final qualifying round is nowhere near to being completed, with four match days still left to play.

Postponing the tournament for 12 months was the wise option.

It’s a decision which, on the face of it, has the biggest impact on international football but many European clubs will be feeling relieved today.

For example, think about what this means for the Premier League title race next season; Liverpool would have lost Mohamed Salah, Sadio Mane and Naby Keita for six weeks in 2020-21 had the tournament gone ahead as planned. That surely would have handed an advantage to their rivals – but now those players will be available for the full campaign.

That may add weight to the argument that Jurgen Klopp doesn’t need a new forward player and that the decision against trying to sign Timo Werner isn’t a problem.

For Africa’s top players though, 2022 is set to be an exhausting year. Along with their club commitments, many will start the year with the Africa Cup of Nations and then end it with a World Cup in Qatar.