Africa Cup of Nations: What to look out for on day eight in Egypt 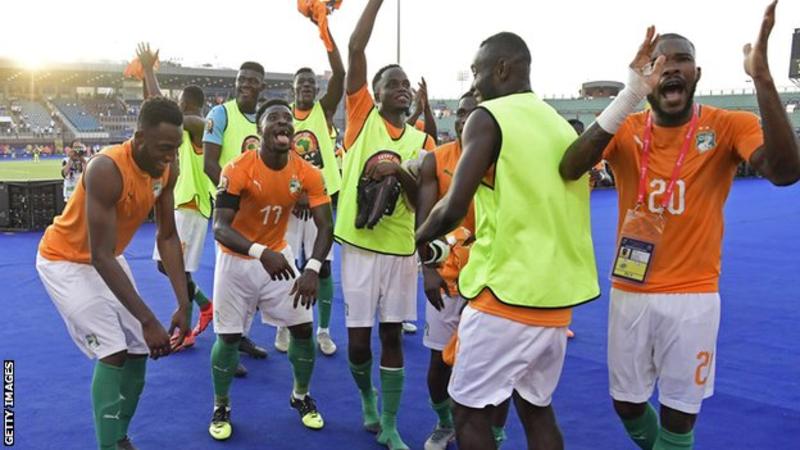 Can the Ivory Coast book their place in the last 16? In their way are Morocco, who can also seal a knockout spot

Algeria beat Senegal 1-0 in the Africa Cup of Nations on Thursday to reach  the knockout stages in a game which did not live up to the hype.

Madagascar picked up their first win at a major tournament by beating fellow debutants Burundi 1-0, and Kenya beat Tanzania 3-2 after trailing at half-time.

The second round of group games continues with Tunisia facing Mali in Group E in Suez (15:30 BST).

Then it’s over to Group D, with both Morocco and the Ivory Coast hoping to maintain their winning start as they clash in Cairo (18:00 BST), where South Africa then take on Namibia (21:00 BST).

Mali striker Moussa Marega was among the top scorers in last season’s Champions League after scoring in six consecutive games for Porto. Only Lionel Messi and Robert Lewandowski scored more.

The 28-year-old, who was born in France, has only scored three international goals – but one of them was from the penalty spot in their opening Afcon game, a 4-1 win over Mauritania.

This is his second international tournament with Mali, after he play all three games in the 2017 Afcon as they exited with two points.

One of Ajax’s stars on their run to the Champions League semi-final, Hakim Ziyech is one of the most exciting African footballers at the moment – and is looking for a bigger club,

The 26-year-old, who scored 21 goals and set up another 24 for his club last season, has a good scoring record at international level too.

Since making his debut in 2015 – having previously been a Netherlands youth international – he has scored 12 goals in 25 games for the Atlas Lions.

He had a big hand in their only goal against Namibia in the first group game, as Iitamunua Keimuine misjudged Ziyech’s free-kick for an 89th-minute own goal.

Lebo Mothiba has enjoyed a productive start to his international career, scoring four goals in his first eight caps.

The Strasbourg player, who scored 10 Ligue 1 goals last season, helped his club side to win the French League Cup.

He failed to get off the mark in their opening 1-0 defeat by the Ivory Coast but will fancy his chances against the side ranked 113th in the world.

What are the big stories of the day?

Tunisia are looking for their first win of the tournament, but in their way stand Mali, who will go into the last 16 if they win.

Mali were almost kicked out on the eve of the tournament because of a crisis surrounding their FA but they survived that threat and beat Mauritania in their opening game.

Tunisia coach Alain Giresse has promised an improved performance after a 1-1 draw with Angola.

“We know that our performance against Angola has been widely criticised but we must turn the page and focus on Mali – and we absolutely must fight,” he said.

Morocco and the Ivory Coast go head to head in Group D, with the winners guaranteed a place in the knockout stages after 1-0 wins in their first games.

Herve Renard, Morocco’s former Ivory Coast coach, is bidding to win the tournament with a third different side, having won in 2012 with Zambia and 2015 with the Ivorians.

But the Frenchman, who once managed Cambridge United, said: “I’m not Morocco’s trump card. I’m lucky to be the coach of a Morocco team with quality players.

“I had the good fortune to be coach of this Ivory Coast. I’ve simply been lucky to be in the right place at the right time, and the Ivory Coast will always be a magnificent memory.”

Renard’s Morocco knocked the Ivory Coast out in the 2017 group stages – and then denied them a World Cup place a few months later with a 2-0 win in Abidjan.

“If I had a secret I would try to put it in place tomorrow, but each game against the Ivory Coast is more than difficult,” said Renard. “The past doesn’t hold much importance.”

The final game of the day takes part at the same venue, Cairo’s Al Salam Stadium.

South Africa take on neighbours Namibia, with both sides losing their opening matches to the Ivory Coast and Morocco respectively.

Bafana Bafana boss Stuart Baxter has urged his side not to underestimate the underdogs, who have never won an Africa Cup of Nations game.

“Talking of dismantling Namibia is totally disrespectful towards a team that qualified for Afcon and ran Morocco very, very close,” the Briton said.

“The onus is on us to produce good football. If we play the way we are capable of, we can win the game but I will not come here and disrespect our opponents.”