Africa Cup of Nations: What to look out for on day four 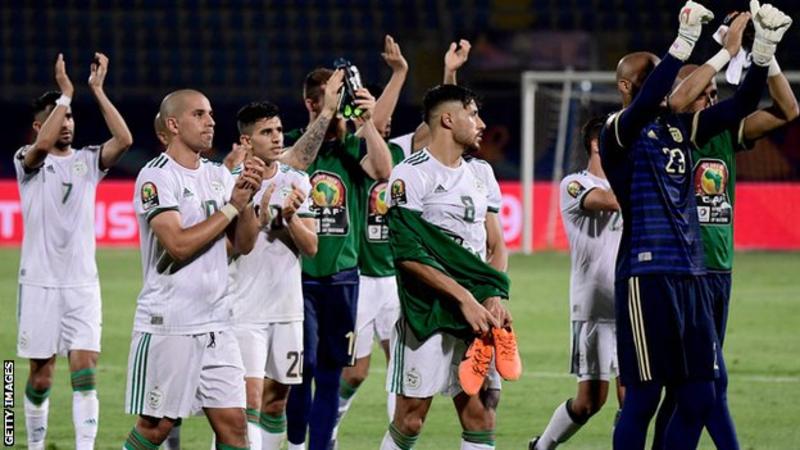 Senegal and Algeria began their respective Africa Cup of Nations campaigns with routine wins over Tanzania and Kenya in Group C on Sunday.

What can we expected on day four in Egypt?

There are three more games to come on Monday, as two-time winners Ivory Coast begin their Group D campaign.

Mali and Mauritania complete the action on day four (21:00 BST).

Ivory Coast forward Nicolas Pepe has been linked with several of Europe’s top clubs following a stellar season for French side Lille.

The 24-year-old scored 22 Ligue 1 goals – and assisted 11 more – in 38 appearances to finish behind only Paris St-Germain forward Kylian Mbappe in the top-scorer chart.

Pepe has registered four goals in his 10 international appearances and will be key to Ivory Coast’s hopes of venturing deep in to the tournament.

Tunisia’s Naim Sliti was the hero for his club side Dijon last season, scoring three goals as the French side retained their Ligue 1 spot with a 4-2 aggregate play-off win over second-tier side Lens.

Sliti scored four goals to emerge as Tunisia’s top scorer in qualifying as the 2004 champions won five of six matches to finish above tournament hosts Egypt in Group J.

In all, he has eight goals in 31 appearances for Tunisia and played all three matches in the 2018 World Cup in Russia.

Porto striker Moussa Marega proved he can deliver on football’s biggest stages as he finished as the joint-third top-scorer in this season’s Champions League with six goals.

Marega has, however, only managed two goals in 18 Mali appearances so far and will be keen to improve on that record against debutants Mauritania.

Where are the big stories of the day?

Can the Ivory Coast claim a third Africa Cup of Nations triumph in Egypt? After Senegal eased to a 2-0 win over Tanzania on Sunday, victory over South Africa will be key to Ivory Coast’s chances of progress from a group widely regarded as the toughest in the 2019 tournament.

Tunisia exited the World Cup at the group stage last summer but prepared for the Africa Cup of Nations by defeating World Cup runners-up Croatia 2-1 earlier this month.

Alain Giresse’s side arrive in Egypt as the second-highest placed nation in Fifa’s world rankings, three places behind Senegal at 25th, and will expect victory against Angola as they look to make light work of a favourable Group E.

Having sunk to 206th in the world rankings in 2012 – with just three sides considered worse – a now 103rd-placed Mauritania will seek to match Madagascar’s feat of registering a first point in their first ever Africa Cup of Nations appearance.

They will have their work cut-out against a Mali side featuring Porto’s Marega and new Southampton signing Moussa Djenepo.