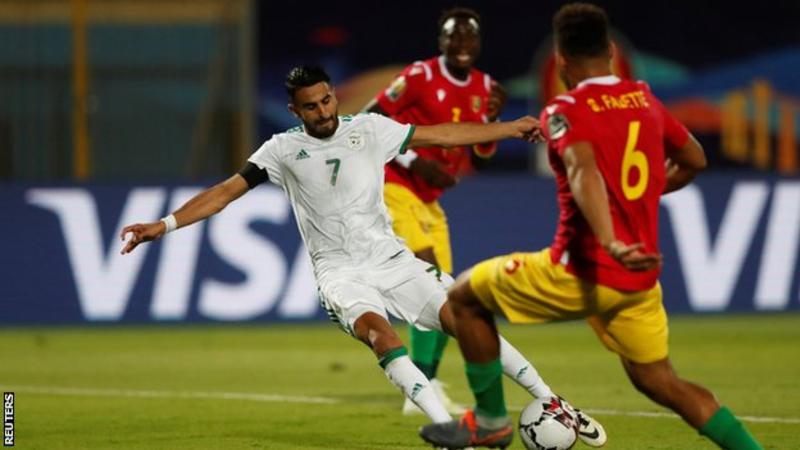 Riyad Mahrez scored a superb goal as Algeria cruised past Guinea 3-0 in Cairo to book their place in the Africa Cup of Nations quarter-finals.

The Manchester City forward fired into the bottom corner after cleverly touching the ball past his marker, adding to Youcef Belaili’s earlier goal for the Algerians.

Adam Ounas sealed a one-sided victory with the third late on.

Algeria face either Mali or Ivory Coast in the last eight on Thursday.

The Desert Foxes dominated from the first whistle but Baghdad Bounedjah wasted an early opportunity when he side-footed the ball over the bar from close range after cushioning Adlene Guedioura’s pin-point cross with his chest.

They took the lead four minutes later when Bounedjah played a neat one-two with Belaili from a throw-in before the latter burst into the area and curled the ball into the far corner, although the presence of VAR may have seen it disallowed as Belaili appeared to commit a foul throw in the build-up.

Algeria captain Mahrez, who had had a relatively quiet opening 45 minutes, came to life with a moment of quality to send Guinea goalkeeper Ibrahim Kone the wrong way with a left-foot strike, before substitute Ounas tapped in Youcef Atal’s low cross from close range.

In contrast, Guinea were sluggish and had to wait until the 54th minute to produce their first shot on target, a speculative strike from 30 yards by Mady Camara, as Algeria claimed their fourth clean sheet in as many matches.

Algeria had another comfortable day. They won as easily as the scoreline suggested.

Algeria seem to have a bit of everything – a bit of speed, a bit of skill, a bit of power. They’ve got the replacements too – the substitutes to come on and make a difference if needed.

Guinea really did struggle. They looked tired. They put in some physical tackles, and there was a lot of effort – but not enough skill. And they really did miss having Naby Keita in their midfield to pull the strings and make things happen for them.

But Algeria are going forward with yet another comfortable win. They will be most people’s favourites now to win the tournament.