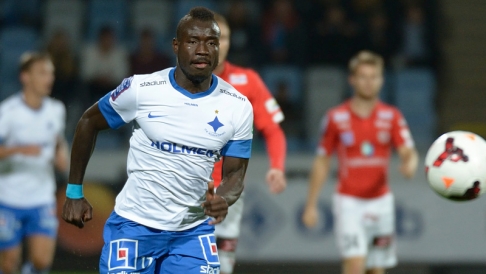 Sierra Leone’s striker Alhaji ‘Andriano’ Kamara has scored on his United States Major League Scoccer (MLS) debut with his first touch on the ball to give DC United an away victory over Sporting Kansas City on Friday.

He came in as a late substitute in the 85th minute and netted the only goal 30 seconds later as he created a chaos in the penalty area and won the battle for the ball to put it back of the net.

“I saw the ball coming,” said the 22-year old, who joined DC United two weeks ago

“I tried to nod the ball into the goal, but when we fight on the ball, then I saw the ball on the ground. I immediately reacted,”

Kamara’s career was halted by his former Swedish club IFK Norrkoping in February after it was detected from Uefa mandatory tests that he had a life threatening heart condition forcing the Allsvenskan champions to take him off their season’s squad.

But further tests carried out in the US proved not to be the case, and was cleared by two cardiologists to play in the MLS paving the way for him to sign for DC United.

The former Kallon FC forward says he’s looking forward to be given the opportunity to play again to contribute to his new team.

“Being out six months and with all that has been going on, I feel really happy besides scoring the goal but playing in the game.”

The DC United Ben Olsen has big plans for Kamara.

He added: “He’s been out, but the one thing about him is his physical presence is real. He knows what to do in the box. He’s going to be nice addition.”

Meanwhile, Bill Hamid, the son of former East End Lions goalkeeper Sullay Hamid was between the posts for DC United to make his season’s debut.

He was impressive as he made important saves.