AS SLFA AND MINISTRY OF SPORT UNVEILS NEW LEONE STARS TECHNICAL TEAM, WHAT NEXT FOR SIERRA LEONE FOOTBALL? 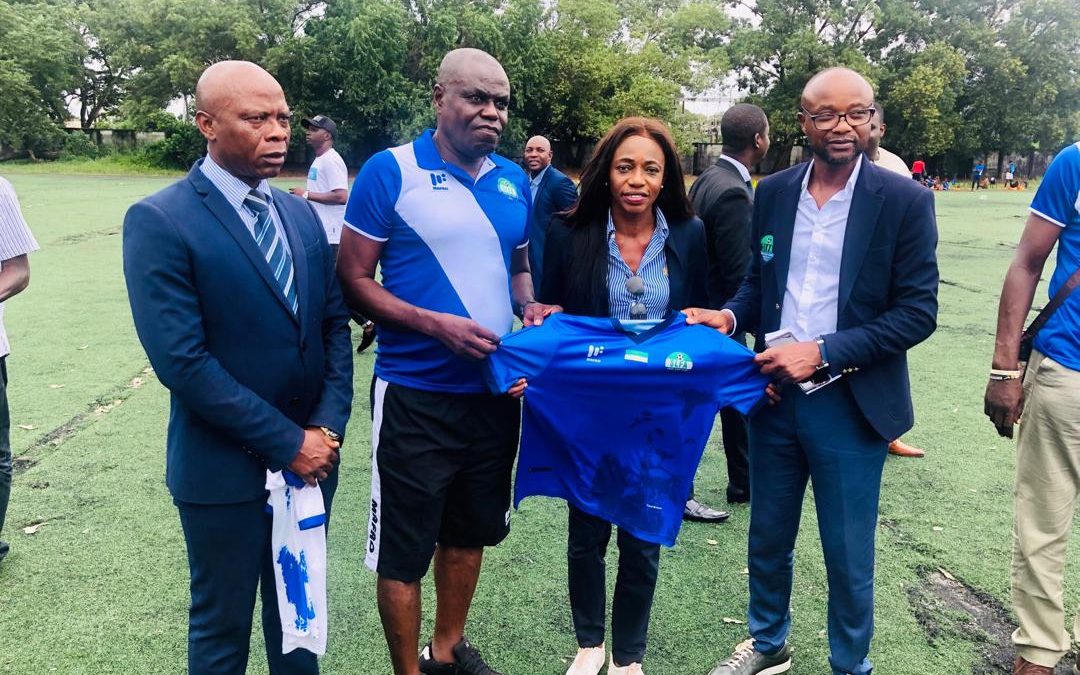 The Sierra Leone Football Association (SLFA) and the Ministry of Sports (MOS), in a joint ceremony held at the SLFA secretariat, Battery Street, Kingtom, Freetown on Tuesday, 20th August, 2019 unveiled the new head coach of the national team Leone Stars, Sellas Tetteh Teive, his assistants, Musa Kallon and Amidu Karim and his entire back room staff.

The unveiling ceremony was graced by the SLFA Prexy, Madam Isha Johansen, General Secretary, Chris Kamara, executive committee members of the FA, the director of Sport, Dr. Kenneth Brima and members of the fourth estate.

A journey which started with disagreements and contentions from both parties as to who and who to be appointed the national football team top job has finally been put to rest, but the question still looms as to the fate of the world’s most love game back home.

During the 2019 AFCON qualifiers, John Keister was in charge starting with a win against Kenya in June, 2017 at the national stadium, by then the relationship between him and the nation’s FA president, Isha Johansen was cordial. Things eventually fell apart between them before John’s next match which was a one nil defeat at the hands Ethiopia in Addis Ababa in March 2018, a match that could be his last in his capacity as the national A team head coach.

The Anti Corruption Commission (ACC), the nation’s anti graft agency had found madam Johansen and her scribe, Christopher Kamara wanting for charges alleged as misappropriation of public funds and misuse of office amongst other charges. A decision the world football governing body, FIFA frowned at and cited as government interference in football. The country was subsequently suspended by FIFA and disqualified from participating in the qualifiers remaining matches.

Senior government officials tried in vain couple of times to strike a compromise with FIFA so they that they could lift the suspension.

Government in its quest to support the resuscitation of football despite being mindful of the country being under suspension, provided an unprecedented sum of Le 3.5B for the commencement of the nation’s elite  football league, a league which had stopped playing for more than four years. The country’s football talents both young and old were show-cased, bringing excitement and smiles to the faces of football fans who had missed their beloved local football league for years.

The Premier League created its own fair share of anxiety with its competitiveness. The Ministry after seeing the display of all thirteen participating clubs wanted to opt for a locally bred coach for the national team. The FA had their own preference for a foreign coach.

John Keister, after going the whole season unbeaten with East End Lions, was deemed a fair suitor for the job despite other locally- based trainers vying for it. The job was advertised by the Sierra Leone Football Association with seven local and eleven foreign coaches including Sellas Tetteh Teive applying.

Whilst waiting for the appointment of the new National Head Coach, the Technical department of the FA called up fifty three (53) home based players for training which after a week was cut down to about thirty (30) with eighteen foreign based players invited.

Sellas Tetteh will eventually beat off competition from others after what was classified as rigorous interview system to claim the countrys’ national team top job, though having a stint with the national team from 2015 to 2016 and almost qualifying the Leone Stars to the 2017 African Cup Of Nations in Gabon.

In his speech, the Director of Sport reiterated his governments’ support for the Football Association in ensuring the national team gets it full backing from government in term of logistics needed for both the 2022 World Cup preliminary and the 2021 African Cup Of Nations qualifiers to start in September and November respectively.

After what was classified as the most successful Premier League in years, will the appointment of Ghanaian Sellas Tetteh be the turning point Sierra to the big stage in Sierra Leone football after more than two decades of waiting by both young and old Sierra Leoneans who have yearned to see the Leone Stars qualify for the African Cup of Nations once again?.