As SLFA Condemns Violence in Football, What’s Next for Leone Stars? 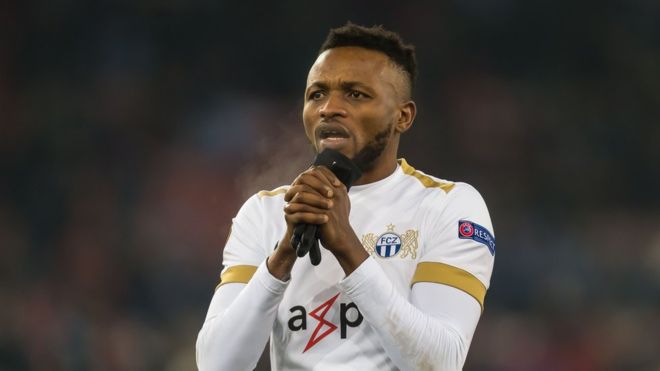 The General Secretary of the Sierra Leone Football Association (SLFA), Christopher Kamara, has denounced violence in sports with football in particular and has called on Sierra Leoneans to embrace the good sportsmanship side of the game.

Mr Kamara was briefing pressmen in a Press Conference organised by the SLFA on a variety of issues gathered from the preliminary qualifying matches between Sierra Leone and Liberia, which the latter won by 3-2 in the course of two legs.

Chris Kamara disclosed that, the Sierra Leone delegation to Liberia experienced a hostile situation which gave him cause log a series of complaints to the match commissioner in Monrovia. He said the Liberians at first failed to provide security for the Leone Stars during the team’s match training on Tuesday evening which forced him to make many calls until the situation was rectified.

“Our fans and dignitaries were maltreated and molested on different occasions before, during and after the match”, he informed.

He further said the incident that occurred during the Liberians training in Freetown was not the making of the FA or the Ministry of Sports, and that such actions were frowned upon by both authorities.

“Upon hearing of the incident, the president of the FA and some members of her executive came to the scene to salvage the situation”, he said, adding that the president of the republic, Rtd Brig. Julius Maada Bio, in conformity to Sierra Leone’s warm gesture to strangers paid a visit to the Liberians at their Mamba Point Kinbima Hotel at Aberdeen.

“We as always expect Liberians to treat us as brothers and neighbours, and not to draw a small issue out of proportion”, he stressed.

Christopher Kamara also said that, the Football Association totally condemns Sierra Leoneans reaction on Leone Stars national team captain, Umaru Bangura after missing that decisive penalty that might have taken the team to the group stage of qualifiers. He said Bangura has sacrificed a lot for Sierra Leone over past decade in the green white and blue colours and Sierra Leoneans should see him as a hero than a foe citing the strenuous conditions he has undergone while representing Sierra Leone in different categories.

“The FA since Sunday have been in constant touch with Bangura and has equally shared his pain”, he intimated, adding that, over two thousand four hundred United States Dollars ($2400) damage was done on Bangura’s premise and the football Association has consented to pay for the damage caused. “Bangura is willing to continue playing for Sierra Leone”, he revealed.

Mr Kamara thanked the Minister of Sports for giving the FA the responsibility to organise the match. He said the Association took only forty eight hours (48Hrs) to do so amid the numerous challenges faced.

Chris Kamara further revealed that, the Association hired the services Zenith Bank for the selling of tickets and the G4 Security (G4S) to man security.
He buoyantly revealed that, for the first time in Sierra Leone in term of international football matches, the sum of five hundred and thirty five million, five hundred thousand Leones (Le 535,500,000) was realised from gate proceeds.

The SLFA scribe also talked about the FA upcoming congresses. He disclosed that, the SLFA have been with constant touch with FIFA and has sent in the revise SLFA statures and Code of Ethics, while FIFA on the other hand have the sent the FA the electoral voting code which have given way for the first of three Congresses in the near future.

The Senior national team coach, Sellas Tetteh Teive, on the side of the technical team, apologises to Sierra Leoneans for the team’s failure to make it to the next stage. He said the technical team faced challenges which amongst others is the short time of one week they had to prepare the boys. He also said, late arrival of foreign based players was also an hindrance factor that prevented the team from making it through.

Coach Sellas further called for the involvement of all for the good outcome of results for the national team. He also called on the media as an essential hub in sharing stories of the team’s training and participation.

“The national league is very important for the technical team, as we can be able to work with local players during the course of the Sierra Leone Premier League”, he remarked.

The future of Leone Stars according to Sellas Tetteh is bright, but what more do the Sierra Leone Football Association (SLFA), the Ministry of Sports and the government of Sierra Leone as a whole should do to make Sierra Leone qualify to the African Cup of Nations after an almost three decade absence?