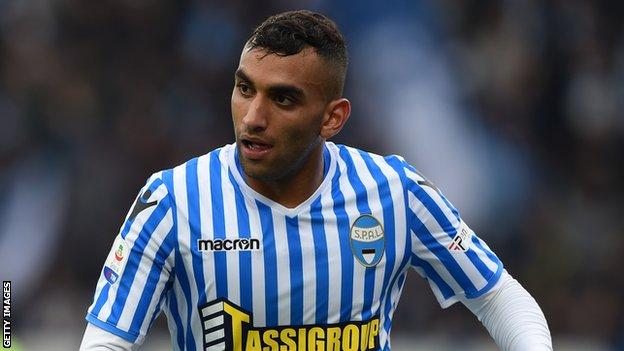 African football stories in short for August including some of the transfers as new seasons begin around the world.

Africa Cup of Nations winner Mohamed Fares faces a long spell on the sidelines with a knee injury.

The 23-year-old Algerian is set to undergo surgery on the left knee that he injured during a pre-season match for his Serie A club SPAL against Italian rivals Cesena last Thursday.

SPAL are yet to say how long he will be out of action, but with such an injury he is expected to miss several months.

Fares was a key player for SPAL last season featuring in 35 of the club’s 38 Serie A games last season and netted three goals.

He played twice for Algeria as they won the Nations Cup in Egypt to take his tally to nine international caps.

It was a “debut to remember” for Burundi striker Saido Berahino as he scored in a 2-0 win for new club Zulte Waregem away to Genk in the Belgian top flight.

Berahino, 26, left Stoke “by mutual agreement” on Wednesday and swiftly completed a two-year deal on Friday.

After making the starting squad, the former West Bromwich Albion player was delighted with his 78th minute goal in Saturday’s victory against champions Genk.

“What a debut to remember. Great performance from the boys. Big thank you for the travelling fans,” Berahino wrote on social media.

Nigeria striker Kayode Olanrewaju is on the move again as he joins Turkish club Gazisehir FC on a season-long loan from Ukrainian giants Shakhtar Donetsk.

The 26-year-old joined Manchester City in August 2017, but was immediately sent out on loan to Spanish club Girona.

His season-long deal was cut short after six months, before another loan to Shakhtar was turned into a permanent move in June 2018.

Olanrewajurepresented Nigeria at the 2009 and 2011 Under-17 and Under-20 World Cups respectively.

He made his debut for Nigeria in a friendly against Senegal in March 2017 and has four caps for the three-time African champions.

The 28-year old DR Congo international has signed a three-year contract with the ligue 1 club who he was loaned to for the 2017/2018 season scoring six goals in 36 matches.

He struggled for playing time last season and only featured in 12 La liga matches for Rayo Vallencano scoring just once.

He also had a stint in China with Hebei China Fortune.

Kakuta played for the country of birth France at youth levels before he switched allegiance to DR Congo, who he has represented four times.

He was not part of the Leopards squad at the recent Africa Cup of Nations in Egypt.

A former Nigeria defender and a member of the golden generation, he played for his country at the 1988 and 1992 Africa Cup of Nations, and when they won the tournament in 1994.

He also represented his country at the 1994 World Cup in the United states.

As a manager he had two stints as Super Eagles coach and led them to a third-place finish at the 2006 Nations Cup in Egypt. He also managed his country’s under-20 and under-23 sides.

Chad forward Casimir Ninga has left relegated Caen to join French rivals Angers for a reported fee of US$3.36 million.

The 26-year-old has signed until 2023 for the Ligue 1 side after scoring six goals in 33 league matches last season.

Sierra Leone international Alie Sesay, who was at Leicester City’s academy, has joined Bulgarian top-flight side FC Arda Kardzhali on a two-year deal.

The 25-old defender spent last season in Greece playing for Kissamikos, where he made 25 league appearances.

The London-born player has had stints with English clubs Barnet and Cambridge United as well as Swedish outfit Frej.

He made his debut for Sierra Leone against Cameroon in October 2014 has so far won a total of five international caps.