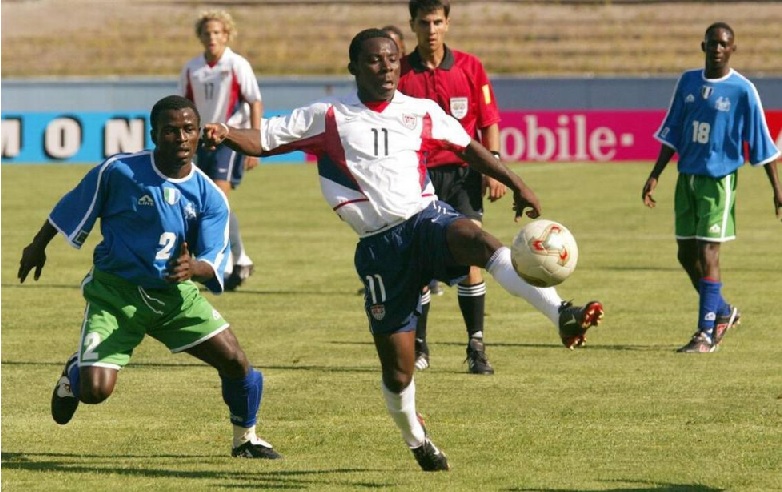 Context: Late President “Pa Kabba” had just declared ‘De War Don Don’ in 2002 after 11 years of war. A bunch of 14/15 year olds selected and coached by Legend Musa Kallon and his team not only took part in the U17 Finland 2003 African qualifiers in Swaziland but also qualified for the World Cup Finals in Finland alongside Cameroon and Nigeria displacing African football giants such as Ghana and Egypt. This is the only Fifa competition a Sierra Leonean side have qualified for the finals to this day. The achievement must be lauded. Spain with likes of Fabregas(Arsenal, Barcelona, Chelsea) and David Silva( Man. City) in their ranks were given a big shock being outplayed by Sierra Leone in the first match. Attacking midfielder Samuel Barlay netted twice for Sierra Stars and was denied a hat-trick by a Spanish own goal. Sierra Stars led 3-2 into the 90th minute. Spain scored with the last kick of the match through Xisco in the 96th minute to draw the match 3-3. Spain picked themselves up after this match and went on to be runners-up to Brazil, winners of this U17 2003 Finland World Cup. It all went downhill for Sierra Stars after this bright start and ended up in ignominy. Sierra Stars put up a valiant display against a Freddy Adu inspired USA (the equivalent of today’s Kylian Mbappe) and lost 2-1. Midfielder Alimamy Sesay the scorer of Sierra Stars only goal. The final match of the group that saw Sierra Stars knocked out of the competion in the group stage with a 3-2 defeat to South Korea, both Sierra Stars goals scored by Obi Metzger. Of the 28 players and officials that left Sierra Leone for Finland only 14 returned to Sierra Leone.

YLE a Finnish news site in 2011 published a series of articles entitled ‘Sierra Leone’s Class of 2003′ reproduced below;

The Sierra Leone football team at the 2003 World Under-17 championships have been the subject of considerable publicity. Some claimed asylum and stayed in Finland, some went back to Sierra Leone, some moved on to European clubs. The asylum claims brought worldwide headlines, and in this series we catch up with some of the players to see how they are getting on.

The decision to claim asylum was not pre-meditated. It was not a pre-planned mass defection, there were competing factors involved, and many of the players were scared that an asylum claim could — if it failed — destroy any hopes of getting a work permit to play for a European club. The team had impressed in their three games. They had drawn 3-3 with a Spain team including Cesc Fabregas and David Silva, and considered themselves unlucky to have been eliminated.

“There was a lot of talk about a few players — Samuel Barlay, Obi Metzger and one or two others,” says Christian Thibault, a German who has lived in Finland for decades. A landscape gardener by profession, he spent the 2003 championships scouting for Borussia Mönchengladbach, the nearest big club to his home village in the Rhineland.

Metzger was one of those who went back to Sierra Leone. Although he was always confident in his ability to play football in Europe, his route was not direct. First he went on trial at top flight clubs in France and the UK, but contract difficulties ensured he could not sign a professional deal. So he played in youth teams of clubs in France and Sweden before injury curtailed his time in Europe. He went back to Sierra Leone to recuperate.

“In Africa it is difficult to play because there isn’t space, alright there are big fields but the structure is not there,” said Metzger when YLE caught up with him at a pre-season tournament in Lahti. The temperature outside is well below freezing and the ground is frozen solid, but there are good conditions inside for footballers to train. The infrastructure gives Finland an edge over Africa, despite the inhospitable climate.

An offer came from Lebanon and off Obi went to earn a decent wage playing for Racing Beirut. Lebanon is not on the itinerary of many football scouts, however, and Metzger’s impatience soon told. He wanted to move to Europe, and asked his friends in Finland to help him.

The move entailed a pay cut, but Finland — despite the low crowds, part-time players and low intensity league — is one step closer to the big time. Obi’s move to Atlantis, a team that yo-yo’s between the second and third tiers in Finnish football, was a calculated risk.

Since then he has played for several teams in the second and third tiers, and even spent a season in Slovakia, without quite making a breakthrough. This year is his first in Veikkausliiga, the Finnish top flight, where he plays for FC Haka. His transfer to Valkeakoski would, in days gone by, have been a major stepping stone in a young player’s career, but for Obi it is more like one last chance.

Haka established a dominant position in Finnish football in the post-war years with massive funding from Finland’s powerful paper industry. The club has won nine championships and regularly competed against the best in Europe.

Those days are gone. The pulp mills at one end of Haka’s ground are now quiet, many of the sponsorships have dried up, and the club is fighting to avoid the fate of a factory club that loses its factory.

“Our budget is quite small this year,” says Olli Huttunen, the club’s Chief Executive. “Haka is like a big theatre. We can give a chance for the players to play and they show if they can do it or not. It’s good for the players and for us.”

Of the 2003 group of 23 players, only five are currently in the Sierra Leone national squad. Obi is one of them, along with Umaru Bangura, Sheriff Suma, Samuel Barlay and Mohamed ‘Medo’ Kamara. Establishing a spot in the national team is of paramount importance to Metzger, but he does not feel that he has shown his best form for the ‘Leone Stars’ yet.

After eight years of setbacks and incremental progress, Metzger no longer believes in overnight success. He has made it to Valkeakoski’s ‘big theatre’, but Haka could be a crossroads for him. If he succeeds, a big move gets a little closer, but if he doesn’t, then he is likely to find himself back in the Finnish lower divisions.

This is the first in a three-part summer series probing the fates of Sierra Leonean footballers who came to Finland for the 2003 under-17 World Championships.