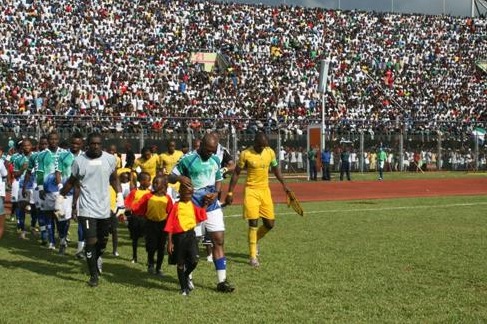 I had been booked on the Friday BMI flight from London to represent sponsors Mediatel/Hummel at the match. I arrived in good time at  check-in with 2 large boxes (70kg) of some last minute hummel kit required by the team.

Calls had been made in advance to Kevin McPhillips/BMI regarding the boxes so I was a bit rattled when told the boxes would have to be re-packed to get the weight down by 6 kilos. After quickly acquiring a small case, at an exhorbitant price, I set about the re-packaging area in full view of other travellers, scouring faces for anyone I recognised, there were none.

The re-packed boxes were checked in and I was hoping that would be it as regards the boxes.

On arrival at Lungi, I was met by our local rep. Everything was going surprisingly smoothly, got through passport control and collected  the boxes within 20 minutes of landing. I cast a satisfied glance towards the Bafana Bafana team and officials who were sat, looking very bored, around the luggage retrieval area whilst the boxes were being hastily wheeled towards the helicopter ticket office. A sudden loud voice shook me out of my state of complacency, Excuse me Sir! Excuse me Sir! Where are you going? I need to check those boxes!. No matter what our local rep explained the official was insistent. A couple of customs officials started opening the boxes. In seconds calls began to rain down thick and fast on the officials various mobile phones with him retorting repeatedly Yes Sah, Yes Sah, Ah Noh Bin Know Sah-  and without another word to us ordered his men to reseal the boxes.

On arrival at Aberdeen, the boxes were duly collected by an SLFA official, gratefully that was the last I heard or saw of them.

On Saturday morning I went to the Leone Stars training session at the National Stadium. A crowd of at least two to three thousand was already in there  and they kept coming for the later Bafana Bafana training session. I must admit on close inspection the pitch was not in good condition, but good footballers can adapt to play on any surface. What was noticeable was that this group of Leone Stars seem closer to the fans and, correct me if Im wrong, a lot of them have graduated to greater things through initially playing for home based clubs, East End Lions, Blackpool, Ports Authority(my team), Edwards, FC Kallon… There was a seriousness about Leone Stars in the way the went about their tasks. Little did I realise there were severe rumblings in the camp as they abruptly left the field and boarded the team bus.

On Saturday evening went to a dinner at the Country Lodge comprised of journalists from both sides. Paradoxically the head chef was South African. Banter was great between the two sides, leaving one with the impression the match would be close.

On Sunday morning, match day, I took part in a sports discussion show on Radio Kalleone explaining the role of Mediatel/Hummel and the story behind the collaboration and sponsorship.

Mediatel are principally a telecommunications company with Points of Presence in London, Sydney, Delhi, Hong Kong and Auckland but also have interests in Sports and the Arts.

During a business trip to Freetown in 2007 a director of Mediatel picked up on the nations fervour for football and returned to London determined to do something about it,  culminating in the invitation of Leone Stars to London as part of the bicentennial celebrations for the abolition of slavery in 2007.

During preparations for the match against Millwall, whilst looking for sponsors, Hummel expressed an interest in sponsoring the Leone Stars kit and if possible for a longer fixed term. Hummel at the time had no links with Sierra Leone and asked Mediatel to facilitate their requirement. Negotiations were started with SLFA and after 3 years(No easy task dealing with SLFA as SABC found to their detriment) an agreement was reached in July 2010 for full kit sponsorship of the team. Leone Stars were able to wear, for the first time, the specially designed home kit against Bafana Bafana though the jersey had been available since January 2009.

For Christian Stadil, Hummel owner, the sponsorship fits in line with with his company’s outlook it’s Company Karma.

“The spine of hummel is radiating positive company karma and spreading good energy. Hummel always try to give something back to people, causes and stories that we believe in.”

Christian told me that the film Blood Diamonds had an effect on him and that we should not be surprised if we get to see Leonardo Di Caprio in the jersey to help promote his good causes for Sierra Leone.

Hummel are also closely linked with Save the Children’s Fund and make a donation to the Sierra Leone chapter on international sales of the jersey.

News kept filtering through about troubles in the Leone Stars camp and this was hours before the match.

I was ushered out of the show to get my highly prized Leone Stars jersey and head for the stadium. The crowds to the stadium were overwhelming. Once there it took over 2 hours to get to our seats.

It was refreshing to see the fans had taken to the  Hummel brand. There was a hierarchy of the type of jerseys fans wore. At the very top was the original official Hummel home jersey mainly worn by expatriates, Lebanese Sierra Leoneans and Presidential stand ticket holders. Next were the original Hummel away jerseys and then the plethora of fake Hummel jerseys to be seen everywhere.

The noise in the stadium was deafening, vuvuzela’s, drums, chanting and clapping far outweighing the piped music. All went up a notch when Leone Stars came out to warm up. I was surprised at the booing of Bafana Bafana  I suppose it all added to the intimidating atmosphere for them as they notably took a very long time to come on to the field I feared they had packed up and fled.

The match came and went in a blur. In the first half we controlled midfield. Rodney Strasser was a revelation ala Makalele/Vieira. The Bangura’s Mustapha and Mohamed up front were full of tricks outwitting the deep lying ponderous South African defence time and time again. Bafana offered little up front, I only remember them having one shot, that in the first 10 minutes which Caulker dealt with.

In the second half, Bafana withdrew and literally parked the bus. Khune their goalkeeper kept feigning injury after every one of his multitudinous saves, running the clock down

Cynical time-wasting after half-time must have been  Pitso’s gameplan after seeing Bafana could not match Leone Stars in ball play  regardless of the state of the pitch.

With time running out the great and the good around me had settled for the draw and started filing out. 1 minute to go the ball found it’s way to Poborsky, a one on one with the keeper, the keeper dived, Poborsky had an open goal from 10 yards, the crowd had begun  to celebrate in anticipation, Poborsky shot, high and wide, ref blew, Game over. Bafana escaped defeat by the skin of their teeth and they know it.