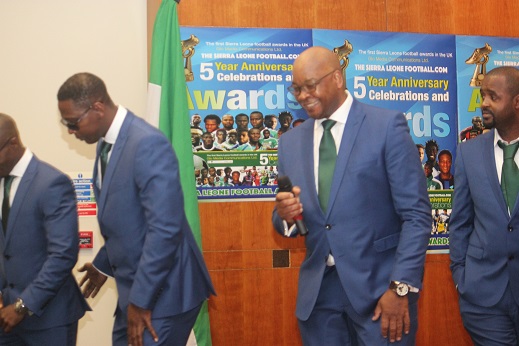 The announcement of winner of the competition was made during the Sierra Leone Football.com Awards and 5th anniversary colourful ceremony held in London  on September 19, 2015.

Kamara who is based in Freetown got the highest score 80% to win the star prize of US$150 followed by Abdul Bangura who got 70%.

Bangura took the runners-up prize which is US$50. Jamil Jamil came third scoring 65% with the prize being a Sierra Leone Football.com T-shirt.

Kamara who had previously won a Sierra Leone Football.com quiz competition few years back will receive his cash prize in Freetown.

The quiz competition was on Sierra Leone football aimed at testing the knowledge of Sierra Leoneans on their country’s football.

1A, When was the first time Women’s football league was officially organised in Sierra Leone

1B, Which team won the league

2A. Who won the maiden Sierra Leone Football.com player of the year award and in what year?

2B, In which year Sierra Leone Football.com was established?

3A. Who was the first Sierra Leonean international to score a goal in the English Premier League?

3B, Which team was he playing for and which team he scored against?

4A, Who scored Leone Stars’ goals in their 2-0 win over Nigeria in a 1998 Africa Cup of Nations qualifier in Freetown.

4B Leone Stars defeated Ghana’s Black Stars 2-1 in Accra in a 1998 Africa Cup of Nations qualifying match. Who scored the goals for Leone Stars?

5B, Dyfan played alongside a Cameroonian goalkeeper, one of Africa’s greatest goalkeepers in one of these clubs. Name the goalkeeper?

6A, Which Sierra Leonean clubs have reached the quarter-final of CAF’s competitions?

6B, Name the Sierra Leonean player who scored four goals in a match  in a CAF clubs competition.

7A, Which Sierra Leonean team have played the final of West Africa Football Union (WAFU)?

7B, Which team did they play against, in what year, and what were the scores over the two legs?

8A, How many Justices have been Present of the Sierra Leone Football Association (SLFA)?

8B, What are the names of the Justices?

9A, How many times Sierra Leone have reached the final of the Amicar Cabral sub-regional Zone II football tournament and in which years?

9B, How many times Sierra Leone have won the Amicar Cabral sub-regional Zone II football tournament and in which years?

10A, How many Leone Stars’ players of Africa Cup of Nations inTunisia 1994 squad survived the Leone Stars’ South Africa 1996 squad.

10B, Name at least six of the players?