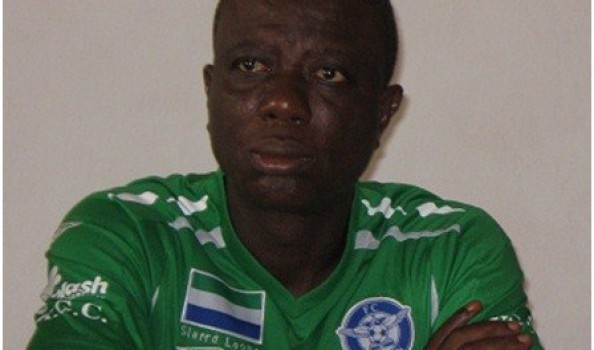 Old Edwardians are in search of a new coach to replace former Sierra Leonean international Musa Kallon who was sacked on Tuesday after five months in charge of the Premier League club.

Kallon’s sacking came after it was alleged in his dismissal letter that he used ‘abusive language in the form of motherly invectives’ and threatened to ‘beat and kill’ the chairman of the club Emmmanuel Saffa Abdulai.

Coach Kallon who is the eldest brother of the legendary Mohamed Kallon was invited by the police for questioning after Abdulai reported the alleged insult and threat to his life. But he was released on bail.

“He called me on my phone with no explanation but insulted me and threatened to slap me and kill me.”

“I took the threat to my life seriously and I sacked him and reported him to the police.”,

“The police have settled it and released him on bail.”

“Nobody wants him detained but if his conduct is becoming threatening to the serenity of the club and my life.”

“When we employed him we did it for the working relationship.”

“I personally recruited Musa to coach the team and gave him all authority.”

“I have stood by him despite everyone saying I should not employ him because of his attitude.”

Coach Kallon says he has accepted his termination letter.

“I have accepted the letter. All I did was to try to seek the welfare of the players,” Kallon explained to Sierra Leone Football.com.

“When I took the Job to coach Old Edwardians on September 18, 2015 I was assured by Abdulai that he would make my job easy.

But that was not the case. I was spending cash from my pocket to take care of the transportation of players and other stuff.”

“I was using my equipment and balls to train the players.”

“He was interfaring with my job by discussing tatics with some players. He did that against Bo Rangers.”

“My players told me they played against East End Lions last weekend without eating and I was shocked.

“I never knew about it. I called Abdulai on the phone to know why the players were not fed.

He told me that he went to night club and he forgot to give money for feeding.”

“I told him what he did was wrong and he should issue an apology to the players so they would be motivated for their next match but he refused.

And I became angry. We had some exchanges and I abused him out of anger and I even told him I would beat him because he’s my younger brother but I didn’t threaten to kill him.”

“He reported the incident to the police who invited me in and took statements from me and I was bailed by one of the players.”

“Abdulai even met me at the training ground and pushed my chest to provoke  me but I didn’t do anything.”

He guided the Sierra Leone U-17 national side Sierra Stars to the finals of the 2003 CAF U-17 championship in Swaziland where they finished as runners-up qualifying them to the FIFA version in Finland the same year.

As a footballer, he played for Mighty Blackpool, East End Lions and Old Edwardians before moving to Cameroon, Romania, Turkey, Portugal and Indonesia.

Kallon won the league with Mighty Blackpool in 1988 and was part of the team that took the ‘Tiss Tass’ boys to the quarter-final stage of 1989 defunct African Clubs Champions Cup now known as CAF Champions League.

He was also part of the Leone Stars team that won the 1993 Amicar Cabral Zone II tournament held in Freetown.

Kallon was a member of the squad that represented Sierra Leone at the 1996 Africa Cup of Nations in South Africa.