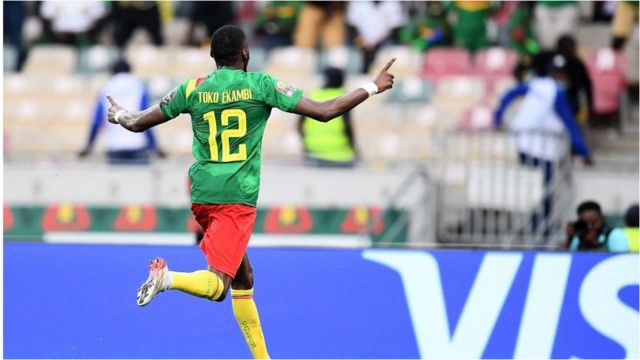 Two goals from forward Karl Toko Ekambi gave hosts Cameroon a 2-0 win over The Gambia at the Japoma stadium in Douala on Saturday to qualify for the semi-final of the Africa Cup of Nations.

The Lyon player rose higher to head home Ngoran Collins’ right wing cross five minutes after the break before he finished a cross from Martin Hongla from the left side of the box in the 57th minute to take his tally to five goals in the tournament.

The Indomitable Lions with massive support from their passionate home crowd completely outclassed the Scorpions and should have won by a wider margin.

Skipper Vincent Aboubakar’s backheel in the box deflected and went over the crossbar, and his header from a cross was saved by the Gambian goalie Baboucarr Gaye in the first half.

Substitute Clinton Njie tried to chip a ball over the advancing Gaye who pushed it to the path of the tournament’s top goal scorer so far with six goals Aboubakar to volley over the crossbar.

The match marks the first for The Indomitable Lions in Douala in the tournament, and the last Afcon game at the Japoma stadium.

They’ll now face either Egypt or Morocco in the second semi-final match at the Olembe stadium in Yaounde on Thursday.

The Gambia, the lowest ranked team in the tournament are out of the race but will hold their head high for reaching the quarter-final in their first ever appearance in a major tournament.

En route to the quarter-final, the Scorpions defeated Mauritania and Tunisia and drew with Mali in the group stage and knocked out Guinea in the round of 16.

The other quarter-final match saw Burkina Faso narrowly register a 1-0 win over Tunisia in Garoua.

The 19-year-old Dango Ouattara netted the only goal and was sent off eight minutes to full time.

The Stallons will now play either Senegal or Equatorial Guinea in the first semi-final game at the Ahmadou Ahidjo stadium in Yaounde on Wednesday.