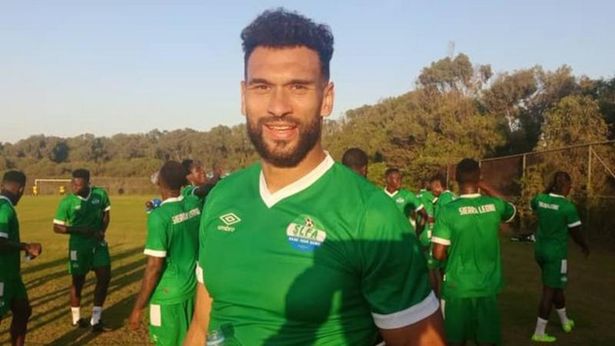 Leone Stars defender Steven Caulker says they’re ready to take on defending champions Algeria in their opening match of the ongoing Africa Cup of Nations in Cameroon on Tuesday.

The encounter which takes place at the Japoma stadium in Douala will mark Caulker’s first official match for Leone Stars, and Sierra Leone’s return to the Nations Cup finals after 25 years absence

Leone Stars will go into the group E match as underdogs but are ready for the battle.

“I know we don’t have many people that believe in us, they’ve written us off,” Caulker told Sierra Leone Football.com.

“It’s going to be a difficult game we know that and we know we are the underdogs but we believe in ourselves, we know the work we’ve put in and we’re ready to compete.”

“We have the people of Sierra Leone behind us, we have the self- belief inside our camp and let’s hope we perform on Tuesday.”

“Individually they have fantastic players, Ryad Mahrez obviously the stand out one, hopefully defensively we can do a good job.”

Caulker, a former England international who previously played for several English teams including Liverpool and Tottenham says they have no special plans for the Manchester City star Mahrez but they’ll be strong to defend their colours.

“No special plans for Mahrez, we give him the respect he deserves but in terms on the pitch we’ll tackling hard, we’ll be strong, we’ll be physical, we’ll use our Sierra Leone strength to try combat these guys.”

“We’ll play to our strength and physically we’re a good and strong side.”

“There’s no special plans for any of their players, we respect them and the careers they have.

“But we are focusing on ourselves, we know the abilities we have inside our camp and we’re ready for the battle,” Caulker who currently plays his club football for Turkish side Gaziantep added.

Leone Stars under the guidance of coach John Keister arrived in Douala last Thursday and have had several training sessions ahead of Tuesday’s match.

On the road to the finals in Cameroon, Leone Stars came from 4-0 down to register a remarkable comeback scoring four goals to draw 4-4 with Nigeria, and also defeated Benin 1-0 in qualifiers.

Algeria on the other hand have gone 34 matches without defeat, the longest unbeaten streak in African football- last lost in October 2018 away to Benin before winning the 2019 Nations Cup in Egypt.

The two teams were in the same group when Leone Stars last participated at the finals in South Africa 1996 with the Desert Foxes winning 2-0.

The two countries first met in the 1982 World Cup qualifiers with the first leg in Freetown ending in a 2-2 draw, and Algeria won the away leg 3-1.

In the 1994 Africa Cup of Nations qualifiers, Sierra Leone defeated Algeria 1-0 in Freetown and the return leg in Anaba finished in a goalless draw.