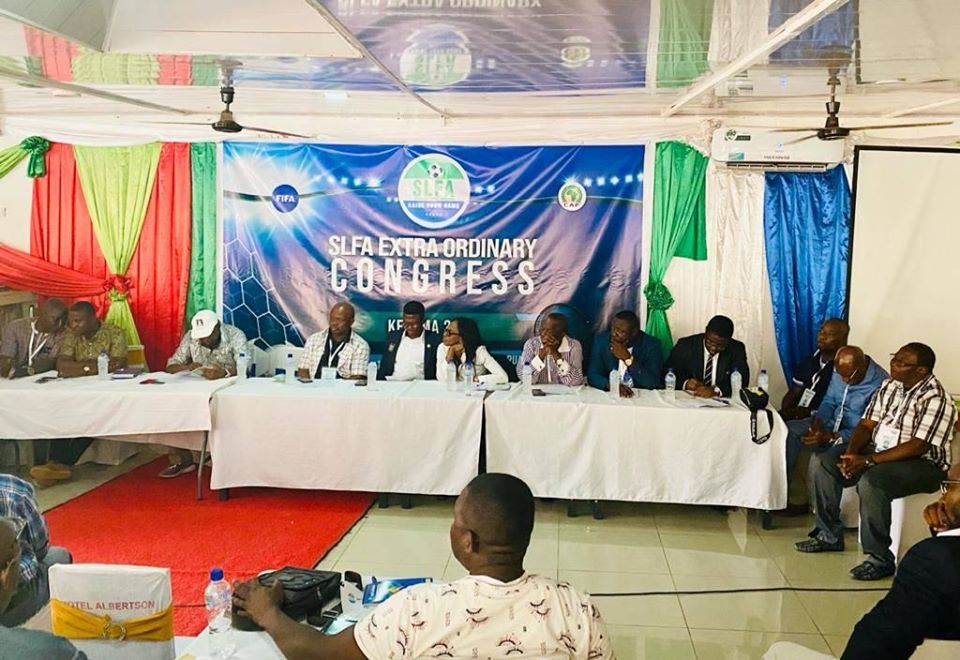 Two differing Press Releases have been issued at the conclusion of yesterday’s congress.

The membership of the Sierra Leone Football Association has today the 1st February, 2020 in an Extra-Ordinary Congress in Kenema approved the Electoral Committee, Appeals Committee and Disciplinary Committee nominated by the Executive Committee to run the SLFA Elective Congress in April.

This decision was taken in the presence of FIFA representative Solomon Mudege the FIFA development officer for Africa and the Carribean.

These bodies are expected to start functioning soonest to set the stage for the proposed SLFA Congress on the 17th and 18th April, 2020 in Makeni City.

In another development, the SLFA Operational Budget for 2020 was approved by the membership of the Sierra Leone Football Association at today’s Extra-Ordinary Congress.

The Delegates of the Sierra Leone Football Association are concerned that the extraordinary congress that took place today, 1st February, 2020 ended in a stalemate after delegates raised constitutional issues. The delegates are concerned with the following issues.

That the SLFA refused to accept legitimate delegates from entering into the hall in the presence of the FIFA observer who endorsed the skewed process.

The budget was not discussed and the President of SLFA refused to have adequate discussions on the topic. The voting was rigged and a proposal for a fresh count was rejected.

That several budget items in the said proposed budget have been expended prior to the Congress, especially the disbursement of the newly proposed quarterly Executive allowances equivalent to the amount of $ 2000. This expending of budgetary items prior to approval is a corrupt act and as such the membership totally condemns the decision and encourages a full investigation by FIFA and/or the Anti Corruption Commission.
That there was no nomination for the position of electoral bodies and the SLFA presented a pre-determined list, hand-picked with the sole intent of disqualifying all potential threats (candidates) against the current imposed SLFA President, Isha Johansen and her team.

That the FIFA Representative, Solomon Mudege, instead of observing, got involved into the SLFA politics in the following ways;

1. *He promoted* the incumbent by supporting comments relating to the artificial turf for Kenema, intending to influence unfairly votes from the Eastern Region in favour of the congress agenda.

2. *He also* endorsed a falsified delegates count to force through the proposed budget after the budget got only 25 votes out 52 delegates. Not passing the 50+1 threshold required by Congress. Yet the budget was passed

4. *We demand* an immediate intervention by the Government of Sierra Leone and FIFA or else we reserve the options of withdrawing all our clubs from participation in the Premier League and any legal option available, including but not limited to Court of Arbitration of Sports!