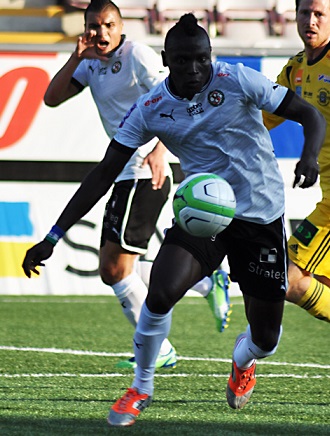 Striker Alhassan ‘Crespo’ Kamara has restarted his career with Häcken with a win 2-0 away win over Helsingborg in theSwedish top tier league on Sunday.

The Sierra Leonean international was introduced on the pitch in the 61st replacing the Nigerian John Owoeri when they had already scored their two goals to mark his first game for the Gothenburg based club.
His debut came a week after moving Häcken on a three-year deal.
The 23 year old former Kallon FC marksman said just after joining Häcken: “It’s a big opportunity for me to start another chapter in my career.”

Kamara is eager to recapture his form of 2014, when he scored 14 goals in 19 appearances in the Swedish top tier league to finish among the top scorers.

His haul included a seven-minute hat-trick scored against his new club Hacken.