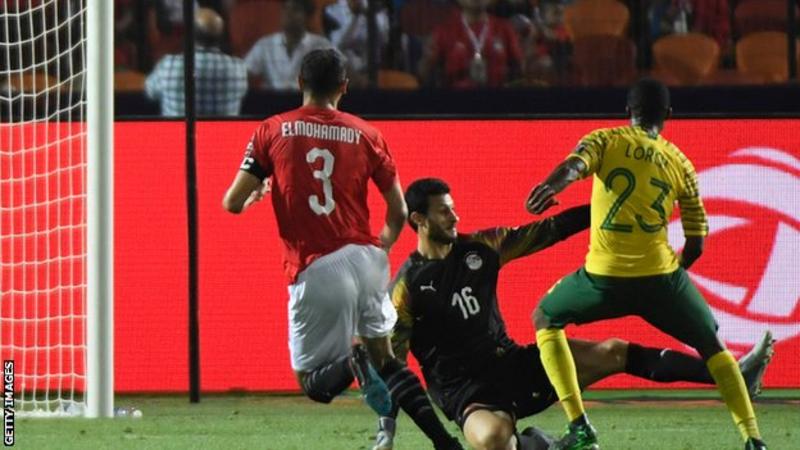 South Africa knocked hosts Egypt out of the Africa Cup of Nations and booked their place in the quarter-finals with a late winner in Cairo.

With Egypt throwing players forward, Thembinkosi Lorch struck on the counter-attack after 85 minutes.

Mahmoud Trezeguet had the hosts’ best chance, but he fired at the goalkeeper.

Egypt have followed holders Cameroon out of the tournament, while South Africa will return to Cairo to play Nigeria in the last eight on Wednesday.

Before the game, Bafana Bafana coach Stuart Baxter spoke about causing an Egyptian “national disaster”, and his team played with an intensity to match their game plan from the first whistle.

The visitors frustrated Egypt by remaining in their shape while showing attacking intent at the other end as the impressive Percy Lau pulled the strings.

Liverpool striker Mohamed Salah – who shook off a cold to make the Egyptian starting XI – had a disappointing evening after firing a half-volley wide in the early stages.

Egypt ran out of ideas in front of an anxious home crowd at the Cairo International Stadium, as Lorch ran onto Lebo Mothiba’s square pass to calmly slot the ball past Mohamed El-Shenawy.

This was a great display from South Africa in front of thousands of Egyptian fans, who saw one of the poorest versions of the Egypt team in the history of the Cup of Nations.

South Africa kept control of the midfield and were stubborn in blocking Egypt’s attacking play.

Egypt manager Javier Aguirre tried to press for the winner but his tactics gave South African the chance to counter-attack, and they took advantage.