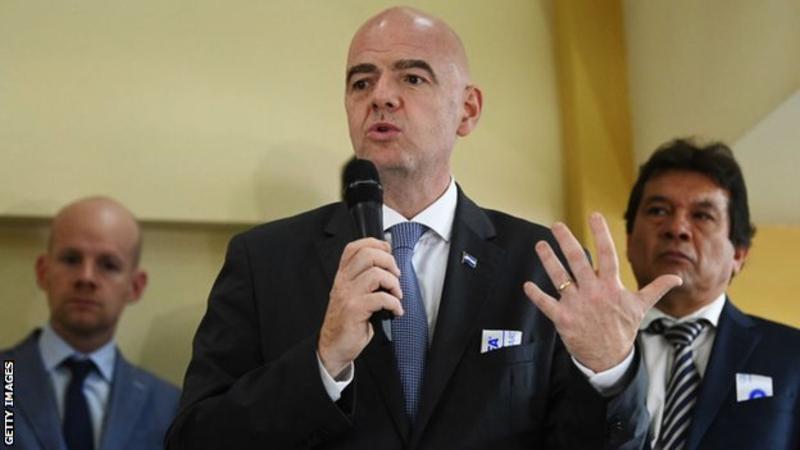 Fifa president Gianni Infantino was talking in Lubumbashi during the 80th anniversary celebrations of DR Congo side TP Mazembe.

He insisted that Fifa wants African football to shine and will work with the Confederation of African Football (Caf) and other stakeholders to improve refereeing, infrastructure and competitions on the continent.

“We want to bring it (Africa) to the highest of heights and show the world the outstanding talent and amazingly gifted players your continent possesses,” he said.

“To do this, we want to implement a three pillar approach: refereeing, infrastructure and competitions, in close cooperation with Caf, all of its 54 member associations across Africa and other stakeholders.

“I am positive that we will make African football reach the top level where it should be because the quality and potential are definitely here.”

One of the plans is for Fifa to create a professional and elite group of African referees who will be independent of administration and political bodies.

This follows on from the decision taken in the last executive committee meeting of Caf where a decision to implement reforms in the refereeing sector was approved.

On infrastructure, Infantino said Fifa would mobilize companies and entrepreneurs to raise around US$1 billion with the objective of building at least one stadium that complies with Fifa’s standards in each African country.

He said Fifa will focus on developing new and better competitions to generate more revenue so that the African clubs can retain talented players.

Infantino hinted at the possibility of creating an African League that would see the best clubs from the continent play against each other, without giving further details or outlining how the plan might impact the Champions League.

He also talked about plans to organize regional competitions and youth tournaments to further help the development of young players in Africa.

Infantino who is touring selected African along with his general secretary Fatma Samoura, Caf president Ahmad Ahmad and African legend Samuel Eto’o among other people.