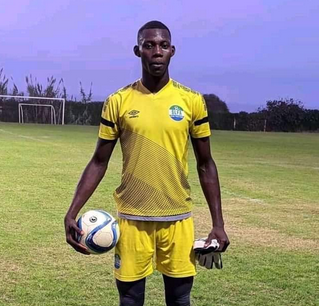 Goalkeeper Ibrahim Sesay was playing in the third tier league in Sierra Leone before he was introduced to premier league football ten months ago when he joined East End Tigers.

The 17-year-old has made rapid progress in his career since then as he’s currently one of the best goalkeepers in Sierra Leone.

Five months to his premier league career he made his international debut for Leone Stars in a 2-1 win over The Gambia in an international friendly match in Morocco and today he’s Sierra Leone’s youngest player at the Nations Cup in Cameroon.

Sesay says he’s delighted with his progress so far in his career and also feeling blessed to be part of the Leone Stars squad at the tournament.

“My dream like every other player is to represent his country in a major tournament but I wasn’t expecting that it’ll happen so soon for me though I was praying to be part of the squad in Cameroon,” Sesay told Sierra Leone Football.com.

“I considered my selection as a very big blessing.

“Being the youngest player in the squad makes me feel so good but it’s also a big challenge which I’m ready to face.”

” I have a talent I need to expose to the world and it’ll a big honour to represent my country.”

The tall goalkeeper faces stiff competition with Mohamed Kamara and Isaac Caulker to be the Leone Stars first choice goalkeeper at the tournament.

But he has proimised to give his best if he’s given the chance to be in between the goal posts.

“Being part of the squad for the Nations Cup is a big opportunity and I’ll give out my best if I’m choosing,” he added.

Sesay recently moved to the current Sierra Leone Premier league leaders Bo Rangers from East End Tigers ahead of the second phase of the league due to start this month.

He was with Rutile based third tier league outfit Hopanda FC who sold him to Tigers before his latest move.

The second youngest player in the Leone Stars squad in Cameroon is 19-year-old Daniel Francis who plays his club football in Germany.

Star striker Kei Ansu Kamara at 37 years is Sierra Leone’s oldest player ever in the history of the Africa Cup of Nations finals.