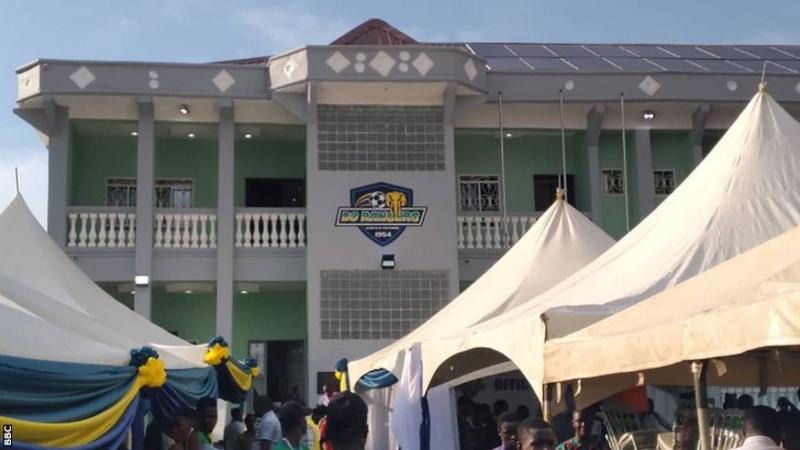 Most football clubs have suffered hugely since the pandemic began – with some in Europe losing hundreds of millions of dollars while others in Africa have really struggled – but a Sierra Leonean club has bucked the trend by going from strength-to-strength on and off the field.

Not only have league leaders Bo Rangers FC managed to pay their players full wages during the recent coronavirus-enforced hiatus but they have also completed the construction of a permanent base for the team.

The new headquarters, the first of its kind in the country which includes a hostel, gym, conference hall and office space, were opened in May in the presence of the Sierra Leone President Maada Bio.

“What I have seen in Bo today, I don’t see anywhere in Sierra Leone,” the head of state enthused.

It’s a sentiment shared by a fair few.

“I never imagined or dreamt that this would happen in Sierra Leone football in my lifetime,” head coach John Dominic Konneh told BBC Sport Africa.

Yet Konneh is using the luxuries of decent facilities and the club’s ability to attract some of the country’s best players by paying good salaries to take his team forward.

“These are the kinds of facilities you find in many countries where football is taken seriously,” said striker Musa Noah Kamara, who had a short-lived spell in Sweden two years ago.

“If you have all the facilities in Sierra Leone and you’re paid well, there will be no need to go overseas. There is no place like home.”

Established in 1954 – but seeking to become Sierra Leonean champions for the first time – Bo Rangers are top the league after nine matches (by just a point) but there are 25 games left of a season currently delayed by Covid.

So how have the club managed to get so much right when they once had less than US$1,000 in the bank and were suffering regular losses on the field?

The man behind the transformation is Babadi Kamara, the head of the country’s sole approved timber-exporting company, who became club’s executive chairman just two years ago.

“When I took over Bo Rangers, I had a clear vision to rebrand the club which I outlined in three categories,” Kamara, 40, told BBC Sport Africa.

“Firstly, I wanted to restructure the club because there were no structures. Secondly, I wanted to construct a clubhouse, and lastly, I want to win the Sierra Leone Premier League as we’ve never won it.

“I’ve succeeded in doing the first and second due to good managerial skills. My objective now is to concentrate my entire energy and resources in winning the Sierra Leone Premier League,” he said, adding – “and also to become one of the biggest clubs in Africa.”

Bo were top of the table when the league was abandoned in March 2020 and still lead the way this season, after a resumption in April which was then curtailed again by Covid in Junn.

Kamara has highlighted the importance of creating different ways of earning revenue for the club.

“Before I took over, match day revenues were US$600-700 but since I came we’ve been able to increase it significantly,” he explained. “We’ve had up to $10,000 on a single day, and we are also selling club jerseys and so many other items.”

He said the club generated over $40,000 when selling over 2,000 jerseys in the 2019-20 season to boost the club’s account, which is also topped up by generous donors on a monthly basis.

“We want to increase the venue capacity for our fans and spectators because that is where the money is,” Kamara pointed out as he looks still further ahead.

He did not expand on the exact nature of support the club would require but the venue is owned by the government.

The construction of the new clubhouse was thanks largely to individuals, local groups, the fan club as well as current government ministers, and other officials, from Bo, who donated on a private basis.

“I can’t give an exact amount we spent because there were donations in the form of materials and cash, so many people came on board doing their little bit. In totality, it’s way above $120,000.”

The improved financial status has also ensured the club’s overall image has attracted others wanting to get involved, and not just by investing.

“Other league clubs now want to host Bo Rangers to get some cash as our matches attract record turnouts, even when playing away.”

“This is a success story and success draws people,” President Bio enthused back in May.

And the way Bo Rangers have progressed is prompting him to dream of a brighter future overseas, where football standards and income are generally higher, for many of the club’s players.

“If we encourage, support the players and give them a platform, I’m sure some of them will represent Sierra Leone at international level,” he stated.

“Some will go out of the country to play professional football and be able to make a living not only for themselves but for their families and will return home with lots of goodies.

“If one of them succeeds out there they’ll not only be ambassadors for the country but also help plenty of others and serve as role models.”

The club’s coach and players say they feel motivated by the facilities and the administrative structures put in place by Kamara.

“This has motivated us to do more, we should match this achievement with good results on the pitch,” Konneh said.

Noah Kamara, who joined at the start of the season as he became the country’s most expensive home-based player, is equally as stunned by the club’s development as his coach.

“This is unbelievable – I never thought this would ever happen in Sierra Leone,” the forward told BBC Sport Africa.

“We’ll push more to make our chairman happy by winning matches and the league. This is how to treat footballers. Give us the facilities, opportunities and platform, because football is our profession.”

“This is an achievement we believe we can build on by encouraging and collaborating with other clubs to ensure we are able to compete at the top in the continent,” SLFA corporate affairs manager Benson Bawoh told BBC Sport Africa.

Kamara and his team will be hoping meanwhile that the country’s league can swiftly resume once again – as they bid to win that long-awaited first top-flight title.