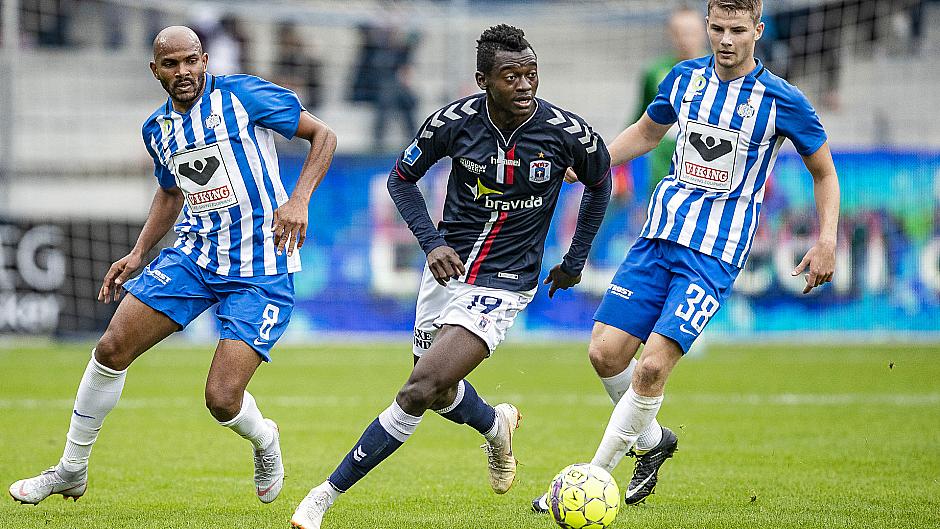 Mustapha Bundu has had a phenomenal series of matches for his club Aarhus GF scoring a hat-trick against Aab on Sunday 15th September and the opener against Odense Boldklub on Friday 20th September.

Mustapha Bundu was a nominee for Young Player of the Year in Sierra Leone Football.com’s 2016 Awards.

Born in Freetown, Mustapha was a scholar of the now defunct Craig Bellamy Foundation. His football and education was furthered in England at Hartpury College. Mustapha graduated from Hartpury College in 2016 scoring 18 goals in six outings for the English Schools’ FA Cup.

Bundu spent a season at Hereford FC, winning three trophies and reaching the FA Vase Final in 2016. Work authorization restrictions only allowed him to ply his trade in a club no higher than the 5th tier in the English Football league system which forced him to leave Hereford.

Bundu went on a trial with AGF, Denmark, at the start of August 2016. After a successful trial, he signed a contract with the club on 31 August 2016.

He received his first international call-up for Leone Stars in August 2018, being a member of a preliminary squad. However, he did not make the final 23-man squad. Bundu was called up for Leone Stars in the recent World Cup qualifiers against Liberia and played in the second half of the Freetown leg.

We will be following our young players in the hope that they will play to their potential and become fully fledged Leone Stars.