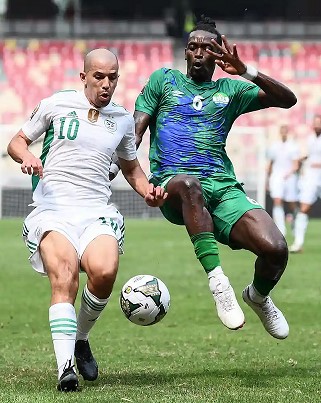 John Kamara in action against Algeria

Leone Stars midfielder John Bankole Kamara believes that his side will make it to the group stage of the Africa Cup of Nations (AFCON) finals for the first time.

His comment came after they held defending champions Algeria to a goalless draw in their opening match in the ongoing tournament in Cameroon, and ahead of their second encounter in group E against Ivory Coast in Douala on Sunday.

“We’re in Cameroon for business and I’m confident that we’ll qualify for the round of 16,” Kamara told Sierra Leone Football.com, adding that: “We are ready for Ivory Coast and Equatorial Guinea.”

“We know it’s going to be tough but we’re going to fight.

“We’re getting stronger and stronger, it started from the Nigeria match when we came from 4-0 down to draw 4-4, and look where we’re today.”

“We have the energy, the right people around us that know what to do. We want to put Sierra Leone on the football map in this Nations Cup,” the 33-year-old added.

Sierra Leone went out in the group stage in their previous two participations at the AFCON in Tunisia 1994 and South Africa two years later.

Leone Stars are currently tied in second place in group E with Algeria with a point each behind leaders Ivory Coast who have three points.

The top two teams in the group will automatically qualify for the round of 16, while the country finishing third will go through if it’s among the four best third placed teams out of the six pools.