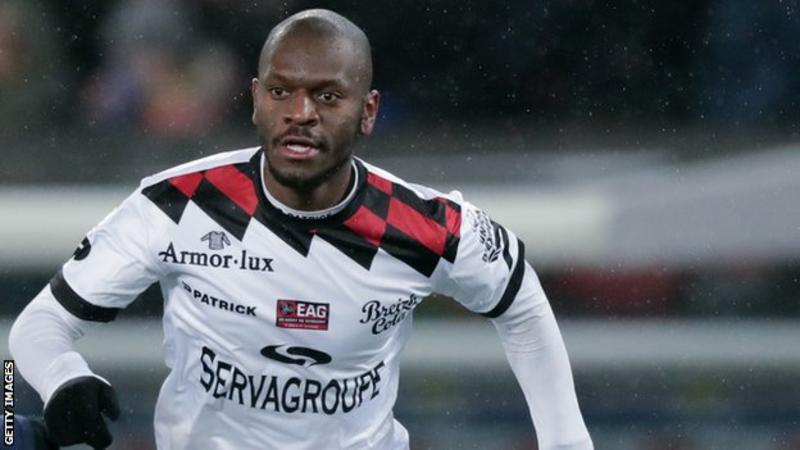 African football stories in short for June as the countdown to the Cup of Nations in Egypt continues.

Former Paris Saint Germain defender Jordan Ikoko has moved to Bulgarian champions Ludogorets where he believes he can “achieve success”.

The 25-year-old DR Congo international officially joined from French side Guingamp on Sunday, leaving France for the first time in his club career.

“I am happy to come to a team like Ludogorets where I can achieve even bigger success,” Ikoko said.

“I believe I can contribute to the team’s participation in the championship and the European tournaments.”

He is the second African player to be recruited by Ludogorets within a week after they also signed Congo Brazaville international Mavis Tchibota.

Ikoko played at the 2017 Africa Cup of Nations but has not been included in the Leopards’ 23-man squad for this year’s event in Egypt.

Uganda warmed-up for the 2019 Africa Cup of Nations with a morale-boosting 1-0 win over twice African champions Ivory Coast in Abu Dhabi on Saturday.

Farouk Miya sealed the victory for the Cranes with a 34th-minute penalty.

Uganda will play in Group A at the Nations Cup with hosts Egypt, Zimbabwe and the Democratic Republic of Congo who were also in warm-up action on Saturday.

West Ham defender Arthur Masuaku snatched a late equaliser for DR Congo in a 1-1 draw against Kenya in Spain.

Kenya led from the 25th minute through Michael Olunga only to be deprived of victory when Masuaku netted three minutes from time.

Ghana and South Africa drew 0-0 behind closed doors in a Dubai clash of two former Cup of Nations winners.

Veteran forward Asamoah Gyan came close to winning the friendly for Ghana with a late header that rattled the crossbar.

The Nations Cup kicks off on 21 June in Cairo with record seven-time champions Egypt hosting Zimbabwe in the opening match.

Egypt’s President Abdul Fattah al-Sisi visited the Egyptian team at the Air Defence Stadium in Cairo on Saturday as the country prepares to host the Africa Cup of Nations.

Egyptian presidency spokesman Bassam Rady said Mr Sisi assured the players that he had trust in the entire team and asked them to win the Cup to make Egyptians happy.

In return, the players promised Egypt’s President they will do their best to win the African title for a record-extending eighth time.

Egypt kick off their campaign on Friday against Zimbabwe at the Cairo International Stadium.

Holders Cameroon drew 1-1 with Mali on Friday in a 2019 Africa Cup of Nations warm-up match in Qatar.

Youssouf Kone scored an individual goal for Mali, cutting in from the wing, before unleashing a powerful shot into the roof of the net.

Cameroon will face Benin, Ghana and Guinea-Bissau in Group E at the Nations Cup while Mali are in Group E with Angola, Mauritania and Tunisia.

In Moroccan city Marrakech, Mauritania came from behind to defeat Madagascar 3-1 in a friendly between countries who will be making their Nations Cup debuts this month.

The Cup of Nations kicks off on 21 June with a Group A match between hosts Egypt and Zimbabwe in Cairo.

Ahmed Elmohamady of newly-promoted Aston Villa scored the only goal of the game after 64 minutes.

Despite the Pharaohs’ Mexican coach Javier Aguirre making seven substitutions, Liverpool Mohamed Salah did not feature in the match.

Tanzania’s Nigerian coach Emmanuel Amuneke made just three changes to his side during the match.

Egypt face Guinea on Sunday, also in Alexandria, ahead of the Nations Cup that begins on Friday.

Congo Brazzaville international Mavis Tchibota will play his club football in Bulgaria next season after he completed a move to top-flight club Ludogorets.

The 23-year-old forward joins from Israeli club Bnei Yehuda having already signed a pre-contract agreement with the former Bulgarian champions in February.

He played for Congo at the 2011 Under-17 World Cup in Mexico and also featured for his country’s under-20s before making his senior debut in a 5-1 home defeat to Ghana in a 2018 World Cup qualifier.

The 27-year-old joins as a free agent after his contract with Moroccan side Renaissance Berkane and signs a deal until 2022.

His impressive season also saw him finish as top scorer in the Confederation Cup with eight goals as Berkane lost to Egypt’s Zamalek in the final.

The Gambia edged out Morocco 1-0 in a friendly in Marrakech as the Atlas Lions continue their preparations for next week’s Africa Cup of Nations in Egypt.

Musa Barrow, who plays for Italian Serie A club and Champions League qualifiers Atalanta, scored the match-winner on 27 minutes.

Morocco coach Herve Renard made numerous substitutions in the first of two friendly fixtures before heading to Egypt for the finals.

It was the second victory in six days for the Gambians against a Nations Cup-bound side after they beat Guinea 1-0 last Friday in the same city.

The head of the Ethiopian Football Federation’s League Committee, Awol Abdurahim, has confirmed the country’s top-flight will resume on Friday.

There has been no action in the Ethiopian Premier League for 8 days after it was suspended due to security concerns, following several violent incidents at matches.

The Confederation of African Football (Caf) has given Liberia coach Thomas Kojo a four-game touchline ban.

The ban relates to Kojo’s dismissal during a 2019 Africa Cup of Nations qualifier away to DR Congo in March.

Kojo was sent off before the start of the second half by Senegalese referee Maguette N’Diaye for protesting over some water spilt in Liberia’s penalty area.

In his match report, referee N’Diaye said the sending off was for “abusive language”.

Kojo’s ban begins with a 2020 African Nations Championship (CHAN) qualifier at home to Senegal on 26 July.

Egypt’s Mexican coach Javier Aguirre took his squad to the cinema in Alexandria to help combat the boredom of their training camp ahead of hosting the Africa Cup of Nations.

The team visited the cinema next to their hotel to watch an Egyptian film about the days that followed the 1967 Six-Day War with Israel called El-Mamar.

The film even had a strong footballing link with former Egypt international Ahmed Salah Hosny in one of the leading roles.

Delhi Dynamos have not disclosed details nor the duration of the deal with the player.

The 24-year-old, a product of Qatar’s Aspire Academy, started his professional career at KAS Eupen before switching to FC Barcelona B in 2014.

He made 27 appearances for the Catalan club before returning for a loan spell at Eupen in 2015. A permanent transfer to the Belgium club followed in 2017 and he played 65 games, scoring once for KA Eupen.

A former U-17 and U-20 youth international, Diagne has two senior appearances for Senegal’s Teranga Lions.