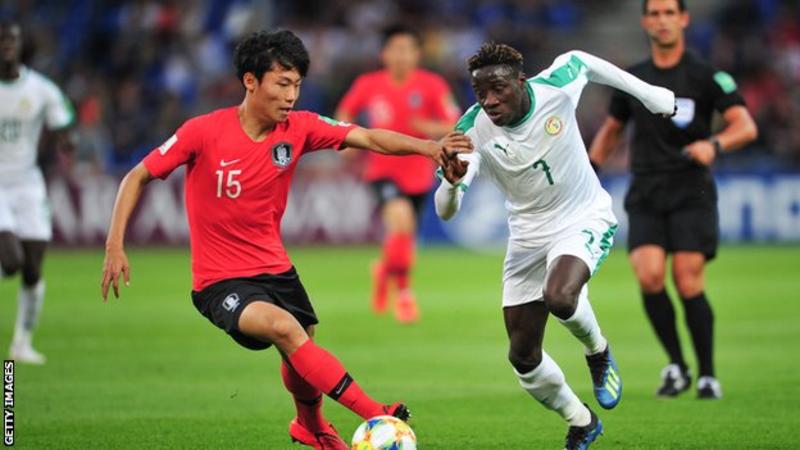 Senegal lost to South Korea on penalties in their Fifa Under 20 World Cup quarter-final.

African football stories in short for June as the countdown to the Cup of Nations in Egypt continues.

There was heartbreak for Senegal on Saturday after they were knocked out of the Fifa Under 20 World Cup in Poland, losing their quarter-final on penalties to South Korea.

In a dramatic match, captain Cavin Diagne put Senegal ahead with Lee Kangin equalising from the spot in the second half. Ibrahima Niane’s 76th minute penalty looked to have secured the African team a semi-final place until Lee Jisol’s late header.

Cho Youngwook put South Korea ahead in the first period of extra time with Amadou Ciss hitting a dramatic equaliser in the dying seconds.

With the quarter-final level at 3-3 at the final whistle, the match went to penalties with South Korea winning the shootout 3-2 after Diagne’s miss.

Angola secured a morale-boosting 2-0 win over Guinea-Bissau in a friendly international on Saturday as both teams continued their build-up for the Africa Cup of Nations which kicks off on 21 June in Egypt.

Angola scored twice within a minute midway through the second half via Ladislau and Mabululu in the match in Portugal.

Angola are in Group E at the Cup of Nations with Tunisia, Mali and Mauritania while Guinea-Bissau will face defending champions Cameroon, Ghana and Benin in Group F.

In another Nations Cup warm-up match on Saturday, Zimbabwe held Nigeria to a 0-0 draw in Asaba.

Nigeria, who will meet Guinea, Burundi and Madagascar in Group B, dominated possession in challenging conditions.

But a Super Eagles attack that included Alex Iwobi of Arsenal could not find a way past Zimbabwe goalkeeper George Chigova.

It was a third consecutive clean sheet for Zimbabwe after they beat Comoros 2-0 last weekend and then drew 0-0 with Zambia. Zimbabwe will be in Group A with hosts Egypt, DR Congo and Uganda.

Mali were knocked out of the Fifa Under 20 World Cup in Poland on Friday, losing 4-2 to Italy in the quarter-finals.

The African side had to play most of the match with 10 men after Ousmane Diakite was sent off for a bad challenge after 21 minutes.

At the time, Mali were losing 1-0 to an early Ibrahima Kone own-goal. Despite being a man down, Mali equalised through Sekou Koita before the break.

The second-half proved just as frenetic with Andrea Pinamonti putting Italy 2-1 up only for Mohamed Camara to level the match to 2-2.

Italy took advantage of the extra man by scoring two goals in two minutes late on through Pinamonti and Davide Frattesi to seal their place in the semi-finals.

The 18 year-old has had a medical with FUS and will join his new club in July when the current season ends.

Sohna will be the third player from Real de Banjul to sign for FUS Rabat after Yusupha Njie and Mohamed Badamosi.

“I’ve been at RDB for my entire career and it is really sad that am leaving but it is for an exciting challenge of playing professional football at a very good club and in a competitive league,” Pa Modou Sohna told his club’s website.

The Gambian youth international has scored ten goals this season for Real de Banjul who are in second place going into Sunday’s final league fixture against Marimoo FC.

France-born defender Souleyemane Doumbia has joined the Elephants’ provisional squad for a training camp in France ahead of the Africa Cup of Nations in Egypt.

The 22-year old plays for French club Rennes and was included in the Elephants’ squad for a Nations Cup qualifier against Guinea last year, but did not play.

The Elephants are due face Comoros in France on Friday in the first of three warm-up games, they will play two further matches in Abu Dhabi against Uganda on 14 June and Ethiopia four days later.

Doumbia made just seven Ligue 1 appearances for Rennes in last season as he helped them to win the French Cup.

Another nation adding to its provisional squad ahead of the Nations Cup is Morocco, who called up goalkeeper Anas Zniti.

The Raja Casablanca keeper has been included by coach Harve Renard as cover for Abdelali Mhamdi, who has a shoulder injury and is racing against time to be fit for the tournament.

The Atlas Lions are at a training camp at home and will play two friendlies in Marrakech against The Gambia on 12 June and Zambia four days later.

Ghana defender Nuhu Musah and his Swiss club St Gallen (FCSG) have confirmed that he will miss the Africa Cup of Nations in Egypt with a knee injury.

The 22-year-old picked up his injury on Wednesday during a training session for the Black Stars in Dubai.

“How serious the injury is, is currently not clear. Nuhu is already on the return journey to Switzerland organized by the FCSG, where he is being closely examined by our medical team,” the Swiss club said.

Musah had been named in a 29-man provisional by head coach Kwesi Appiah and hade been training in United Arab Emirates since June.

South Africa’s team doctor Thulani Ngwenya has confirmed that Keagan Dolly will miss the upcoming Africa Cup of Nations with a groin injury.

The 26-year-old, who plays for French club Montpellier, had been named in Bafana Bafana’s provisional squad despite missing most of the season after breaking his leg.

An MRI scan has shown he has “aggravated his niggling groin injury”.

“He’s completely out of the Afcon. There is no chance that his groin injury will recover in time,” said Dr Ngwenya.

Algerian midfielder Victor Lekhal has had his contract with French Ligue 2 club Le Harve extended until 2023 despite he missing the end of the season with an injury.

The 25-year old has not played since March after rupturing his cruciate knee ligaments on his international debut for Algeria in a 1-0 win over Tunisia in a friendly.

After his contract extension Lekhal said: “I’m a warrior, I’ll not let go of anything just because I’m injured.”

Lekhal made 26 league appearances for Le Harve last season before his injury.

Liberia international Tonia Tisdell has renewed his contract with Cypriot top-flight club Nea Salamina Famagusta until 2020, with an option for a further year.

The 27-year-old’s contract was set to expire at the end of the season and has seen his debut season at the club limited to just six games due to injury.

Tisdell, who has 12 caps for Liberia, joined Famagusta on a free transfer from Denizlispor in Turkey’s First Lig in early February.

Wydad Casablanca put the controversies of the African Champions League second leg behind them to clinch the Moroccan league title on Tuesday.

The championship was won with a game to spare with a 4-1 win over Olympique Khouribga which put them six points clear of city rivals Raja.

It is a 20th league title for Wydad as defending champions Ittihad Tanger are 18 points further back.

Mali overcame Argentina on penalties after a 2-2 draw to progress to the quarter-finals of the Under-20 World Cup in Poland.

Argentina took the lead shortly after half-time through Adolfo Gaich before Abdoulaye Diaby headed home an equaliser in the 67th minute.

Diaby then scored an own goal just a minute into extra-time to give Argentina the lead again only for Mali to take the game to penalties as Boubacar Konte was on target in injury time at the end of the match.

Sambou Sissoko struck the winning penalty for Mali while Youssouf Koita’s save from Tomas Chancalay’s attempt was the difference in the penalties.

Mali will now face Italy on Friday in the last eight while Senegal will play South Korea a day later.

Esperance were crowned Tunisian champions on Monday after a 4-0 victory over JS Kairouane in Rades.

Their victory, just three days after winning the African Champions League, makes it three league titles in a row and a 29th overall for Esperance.

“This is a remarkable achievement that I wish to celebrate with our fans towards the end of the season” Esperance coach Moain Chaabani said.

Esperance secured the title with 3 games left for them to play.

Ukrainian side Dynamo Kiev have announced the signing of Ghanaian Mohammed Kadiri.

The 23-year-old defender joins from Austria Vienna on an initial four-year deal with the option to extend for another 12 months.

Kadiri spent last season on loan at Russian Premier League side Arsenal Tula, where he scored two goals in 27 appearances.

He is yet to make his international debut for Ghana and has not been included in the Black Stars provisional squad for the upcoming Africa Cup of Nations.

Senegal beat Nigeria 2-1 to reach the quarter-finals of the Under-20 World Cup in Poland.

Amadou Sagna scored his fourth goal of the finals after 36 minutes before Ibrahima Niane, who plays for French second-tier side Metz, added a second just before half-time.

Nigeria pulled one back through Success Makanjuola five minutes after the break but Senegal held on for the victory.

In the quarter-finals Senegal will play either Japan or South Korea on Saturday.

Holders Cameroon will play three friendlies against Zambia, Mali and Spanish division two outfit AD Alcorcon in the build up to the 2019 Africa Cup of Nations in Egypt.

Cameroon’s football federation (Fecafoot) published the Indomitable Lions’ training schedule on Monday, ahead of Africa’s showpiece event which kicks off on 21 June.

They will be based at the prestigious training facility of Spanish giants Real Madrid in Valdebas from 4-10 June.

The five time African champions will face Zambia on 9 June before concluding their stay in Madrid with a friendly against Alcorcon a day later.

The squad will head to Qatar for another training camp from 11-16 June where they will come up against Mali on 14 June in a warm-up game.

The Indomitable Lions have been drawn in Group F at the Nations cup and will play Ghana, Guinea-Bissau and Benin.

Ivory Coast’s Football Federation has confirmed two more friendly matches – against Comoros and Ethiopia – ahead of the Africa Cup of Nations.

The Elephants, who have named a 27-man provisional squad, will face Comoros on Friday in France where they are currently at a training camp.

They will then move to a second training camp in Abu Dhabi where they will meet Ethiopia in their final warm-up game on 18 June.

Ivory Coast will play in group D at the Nations Cup alongside Morocco, South Africa and Namibia.

The 22-year-old switched to Berlin on loan last summer and scored two goals in 19 league appearances as Union Berlin sealed promotion to the German top-flight.

“It was a good year for me and I’m looking forward to the new season and the Bundesliga.”

The announcement was made by Abha less than an hour after Esperance lifted the title following a controversial win over Wydad Casablanca in the final.

Bguir, 25, was the hero in last year’s Champions league final, scoring a brace against Egyptian giants Al Ahly in the return leg as Esperance won the competition.

Bguir, who has been capped 11 times by Tunisia, leaves Esperance after four seasons.

Mali booked their place in the last 16 of the Under-20 World Cup in Poland, despite a 3-2 defeat to France in their final match of Group E on Friday.

Mickael Cuisance put France ahead with Sekou Koita equalising for Mali. In the second half, Moussa Diaby and Amine Gouiri made it 3-1 to France with Ousmane Diakite adding a second for Mali in the dying seconds.

Mali will now face Argentina on 4 June for a place in the quarter-finals.

There will be an all-African last 16 tie on 3 June when Senegal and Nigeria face each other.

South Africa’s campaign ended on Friday night with a 1-1 draw against Portugal in their final Group F match.