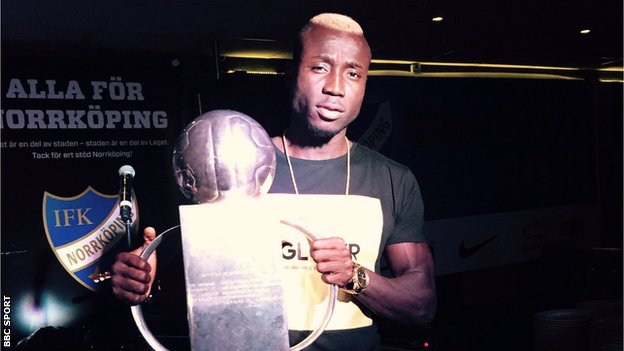 His side IFK Norrköping won the league on the last day of the season thanks to a 2-0 away victory over Malmö FF on Saturday, with Kamara starting the game and leaving the pitch in the 90th minute.

It is the first major title of the 21-year-old striker’s career.

“I’m so happy for this success and my heart is full of joy,” Kamara told BBC Sport.

“I look forward to playing in the Uefa Champions League next year as it’ll be a dream come true.”

Kamara returned to Sweden in the second half of the season after a brief loan spell with Malaysia team Johor Darul Ta’zim.

He scored six goals in the campaign to help IFK Norrköping win the league title for the first time in 23 years.

“It has been a long journey to achieve this success and we won because we were decipline and hard working,” Kamara said.

“I dedicate the success to my family. I can’t wait to celebrate it with them when I return home this month for vacation.

“The party has already started as we presented the trophy to close to 10,000 fans who were waiting for us at the Norrkoping city square for hours to celebrate with us. It was an amazing and emotional moment.”

Kamara hopes this latest success will be the start of bigger and better things to come.

“This honour means a lot to me as it’s the first major title in my footballing career.

“I hope it’ll be the stepping stone for more success to come my way.”

Kamara was struggling for playing time when he returned to Sweden from his loan spell in Malaysia but gradually fought his way back into the team and was prolific towards the end of the season, scoring five goals in IFK Norrköping’s last four league games.

His compatriot, Mohamed Bangura – formerly of Celtic – scored eight goals in the Swedish league with AIK Stockholm who finished third.

Kamara started his football career with Belvic United – a second tier league side in Sierra Leone – and later joined Kallon FC, owned by the legendary Mohamed Kallon, before he moved to Europe in 2012, joining Norrköping two years later.