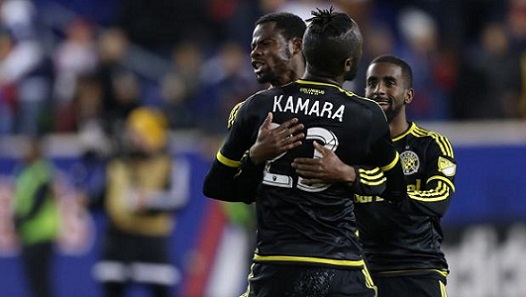 Sierra Leone forward Kei Ansu Kamara is very close to winning the United States Major League Soccer (MLS) with Columbus Crew as they
have reached the final of the MLS Cup after they were crowned the eastern conference champions on Monday.

They lost 1-0 in New York in the return leg match on Monday but had won the first leg at home 2-0 eight days earlier with Kamara scoring
the second goal.

“You win games, everything changes for a club,” Kamara told MLS official website after winning the Eastern Conference final.

He added: “It doesn’t matter what club it is. The fact that we’re winning games and now we’ve won the first trophy of the year, a lot of
things have to change in the city,”

“Everybody will respect you and everybody comes out and supports you.You know that you’re not just playing for yourselves. You’re playing
to represent Columbus, and that’s what’s really good about this team.”

Columbus Crew have home advantage as they will be hosting the MLS Cup final for the first time in the history of the competition.

This is the closest Kamara has come to win a major trophy in his entire football career.

He has had a fantastic season in the MLS scoring 22 goals in the league before Columbus Crew qualified for the MLS play-offs.

So far Kamara has netted three goals in the play-offs to take his season tally to 25 goals which included six braces.

Kamara was also named in the MLS best 11 players of 2015 for his overall season’s long outstanding performance after winning the
Columbus Crew SC’s Barbasol Most Valuable Player in 2015.