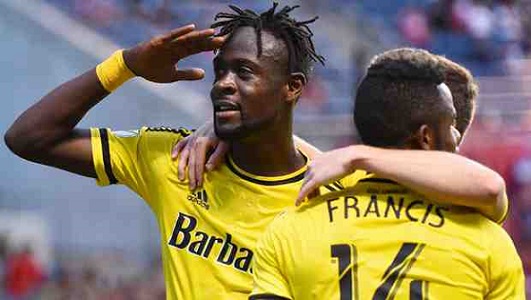 “I feel honoured and delighted to be competiting for the best player award,” the 31-year Kamara told Sierra Leone Football.com.

The former Middlesborough forward added: “I know the competition is tough because the other nominees are good players and did well in 2015.”

“I feel I’m at the prime of my career and I’m calling on people to vote for me. I love my colleagues and good luck to all of us.”

The other nominees for the prestigious award are China based Mohamed ‘Poborsky’ Bangura, Alhaji ‘Andriano’ Kamara who plays in Sweden, Mustapha Dumbuya based in Scotland and the Leone Stars skipper Umaru ‘Zingalay’ Bangura playing in Belarus.

The award is being voted for by viewers of the Sierra Leone Football.com website and already voting has started and it’ll end at midnight on the 31st January 2016.

The winner will be announced in an award ceremony in London on Saturday May 21.

Kamara believes such an award will help to inspire players to do well.

“I want to thank the organisers for such an award which inspires us to do well.”

“I know what it means to win such a prestigious award as I won the maiden award in 2012. It has inspired me a lot to do more.”

Kamara had a good season in 2015 scoring 26 goals in all helping his club Columbus Crew to win the MLS eastern conference zone cup and also to reach the final of the MLS Cup.

He won the best player award of his club and finished as the second most valuable player in the MLS.