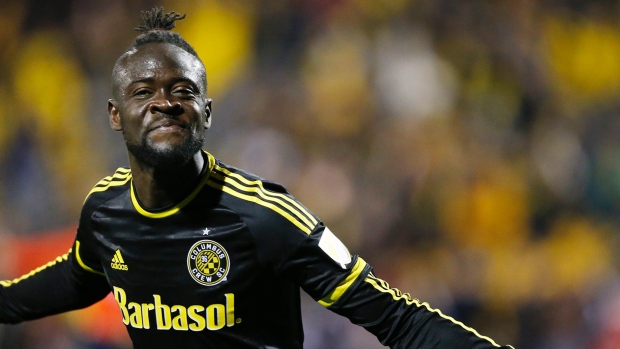 Kei Kamara scores his second goal of the season

It was Kamara’s second goal of the season and his second in five weeks.

The 31-year old accounted for his goal four minutes after the interval to restore Crew’s lead to 2-1 after former Spanish international David Villa had cancelled out Ethan Finlay’s goal.

Justin Meram increased the Ohio based team’s lead to 3-1 in the 80th minute before Villa got his brace seven minutes later to register his fourth goal of the season.

It has not been a bright start for Colombus Crew in the MLS despite their victory, as they’ve only managed to secure five points from six games, and as a result are second from bottom in the eastern conference table.

The 29-year old midfielder has featured in each and every minute of all the three matches so far they have played in the NASL including Saturday’s away defeat to Indy Eleven.

It was their first defeat of the season as they convincingly won their first two games in the league.

New York Cosmos are currently third in the NASL standings with six points.