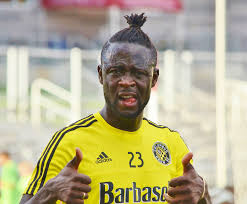 Striker Kei Ansu Kamara has netted his third goal of the season to give Columbus Crew a 1-0 home victory over Houston Dynamo in the United States Major League Soccer (MLS) on Saturday.

The 31-year old scored from the penalty spot in the 21st minute to give Columbus Crew their second win of this season.

The goal was Kamara’s second consecutive goal in MLS this season as he was on target a week ago against New York City.

His opening goal of the season was against Philadelphia Union on March 13.

He is among five players nominated for the 2015 Sierra Leone Football.com best player of the year award to be announced in a ceremony in London on May 21.