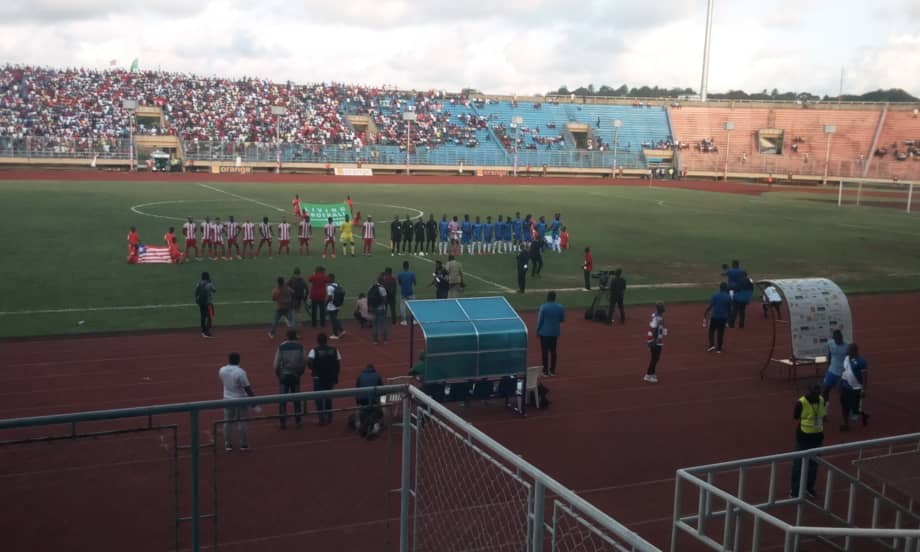 Two penalties on either side of half-time gave Liberia a strong grip in the tie for qualification to the group stage of the 2022 FIFA World Cup in Qatar.

Sierra Leoneans at the Samuel K. Stadium in Monrovia were left livid after seeing decisions contentiously awarded against the Leone Stars gifting the Liberians a two-goal advantage ahead of the second leg in Freetown, four days later.

The Lone Stars started the match buoyantly hitting the woodwork in the first few seconds of the game.

The Liberians won the first of their two penalties in the eighteenth minute after striker Kpah Sherman was adjudged by the referee to have been fouled by Ishmael Koroma (Jaw Jaw), the penalty kick subsequently scored by Terrence Tisdell.

Sierra Leone though could not find any rhythm to their game, with the team’s only half chance coming in the 41st minute through a brave surge by Abu Dumbuya, forcing a save from the Liberian goalkeeper. The Liberians had the bulk of the possession in the first half creating some clear cut chances and forcing couple of good saves from Solomon Zombo Morris. The first half ended with just the one penalty goal from Terrence Tisdell.

A different approach from Sierra Leone at the start of the second half changed the dynamics of the match creating some nervous moments for the Liberians.

Sierra Leone’s good performance in the early stages of the second half would subsequently give them the equaliser courtesy of Kwame Quee, who slotted home a Musa N. Kamara’s back-headed flick in the 56th minute.

A defensive mix-up between Ishmael Koroma and goalkeeper Zombo Morris let Sam Johnson clear through to score Liberia’s third goal giving the Lone Stars a two-goal cushion ahead of the second leg on Sunday, 8th September at the Siaka Stevens Stadium in Freetown.

Wednesday’s victory for Liberia is their ninth (9) in seventeen meetings with just three wins for Sierra Leone and five draws.

Sierra Leone failed to make the group stage of qualifiers in 2015 for the 2018 FIFA World Cup in Russia losing on away goal against Chad.

Sierra Leone need to win by 2 – 0 in Freetown to gain qualification to the group stage or equal the result in Liberia to take the match into penalties.