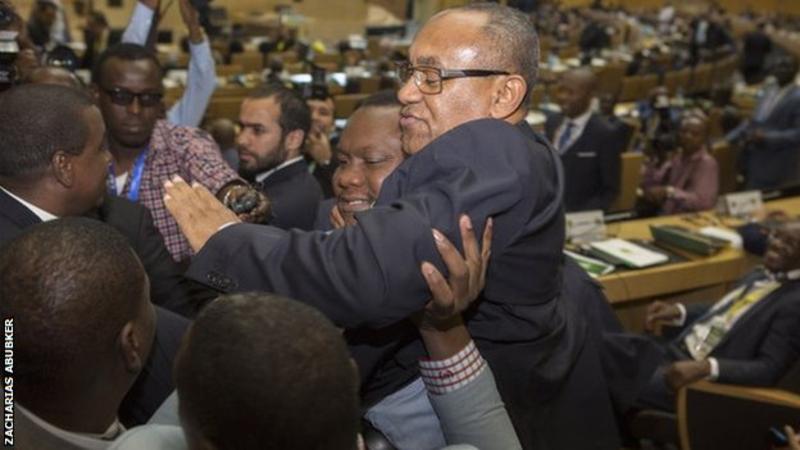 Ahmad is held aloft after being elected Caf president

Ahmad won 34 of the 54 votes in the election, which was held in Ethiopia’s capital Addis Ababa on Thursday.

The result means a change in leadership for the first time since Cameroonian Hayatou took charge in 1988.

Ahmad, who appeared very emotional, becomes only the seventh Caf president in the body’s 60-year history.

The 57-year-old, who goes by a single name, told BBC Sport afterwards: “I can’t talk at this time. Only one thing – I thank God, I thank my team.

“We worked hard but we won. That was the first step. The second step is to develop African football.

“Some days I thought I would win – today I didn’t (think I would win).”

The result was greeted by cheers at the Caf congress as Ahmad was carried on the shoulders of jubilant supporters to the podium after the result was announced.

In contrast, Hayatou was led from the auditorium by aides but he told reporters as he departed: “It is not that bad.”

Ahmad later added: “When you try to do something, you mean that you can do it. If I can’t do it, I never stand.

“This is sweet victory. When you work hard for years and months and you succeed, that is great.”

Ahmad, who became Madagascar FA chief in 2003, takes over as Caf president on an initial four-year term, and has promised to modernise the body and make it more transparent.

His first job, he said earlier on Thursday, would be to introduce a new code of ethics and he has also pledged to extend ethics checks on African football officials.

The departure of Hayatou is a huge change for African football and the 70-year-old will also lose his Fifa position and his place on the ruling council of world football’s governing body.

He had been challenged for the Caf presidency only twice before and both times won with landslide victories.

This time he won only 20 votes, ending his hopes of winning an eighth term in office that would have seen his presidency extend for more than three decades in total.

“His excellency Issa Hayatou has done a lot for African football (but) it is time for him to step back,” said George Afriyie, vice president of the Ghana Football Association.

Liberia Football Association President Musa Bility added: “Africa has made an emphatic decision that we are ready for change.”