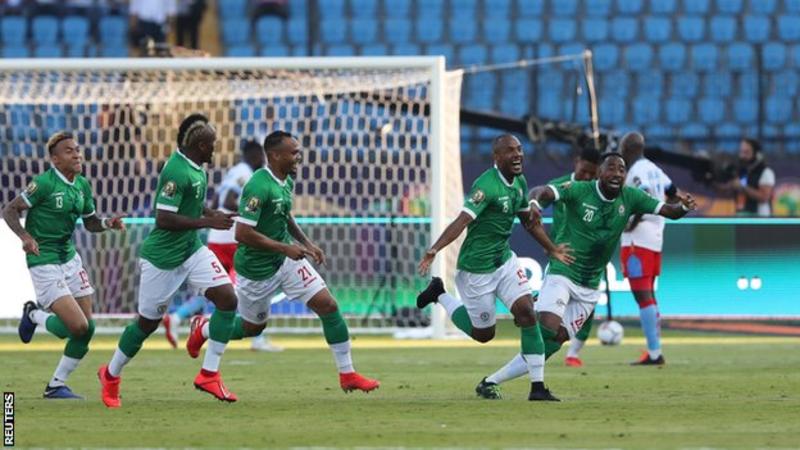 Madagascar were 190th in Fifa’s world rankings five years ago

Africa Cup of Nations debutants Madagascar produced another upset to beat DR Congo 4-2 on penalties after a 2-2 draw and seal a quarter-final spot.

In a thriller, Madagascar took a surprise lead through Ibrahim Amada’s superb 20-yard strike before Cedric Bakambu equalised with a header.

Madagascar scored all their penalties.

In contrast, DR Congo missed two, with Everton winger Yannick Bolasie’s attempt going over the bar to confirm Madagascar a quarter-final against Ghana or Tunisia in Cairo on Thursday.

Having beaten three-time winners Nigeria in the group stage as well as Burundi, Madagascar’s fairytale run continues after another impressive performance in Alexandria, Egypt.

They were 190th in Fifa’s rankings five years ago but have now advanced further in this tournament than hosts Egypt and holders Cameroon, both of whom went out on Saturday.

Before their 90th-minute equaliser, DR Congo were denied a penalty in controversial circumstances when Britt Assombalonga appeared to be fouled by Thomas Fontaine.

However, with the video assistant referee system not being used until the quarter-finals, their appeals were ignored.

This is one of the all-time fairytale stories in Africa Cup of Nations history because Madasgacar’s run needs real perspective.

Because they were ranked among the six worst teams on the continent, they took part in the very first match of this 2019 Nations Cup campaign – in the preliminary round of qualifying, against Sao Tome e Principe in early 2017.

Three players who started that game played in this one, a match which makes them among the best eight sides in Africa – an unbelievable dream.

The “Barea” played well, with real heart and passion, during 90 minutes but tired considerably in extra time when they were lucky to hold on.

But they have squeezed through – and given the Cup of Nations expansion from 16 to 24 teams every justification, in the face of criticism from some.