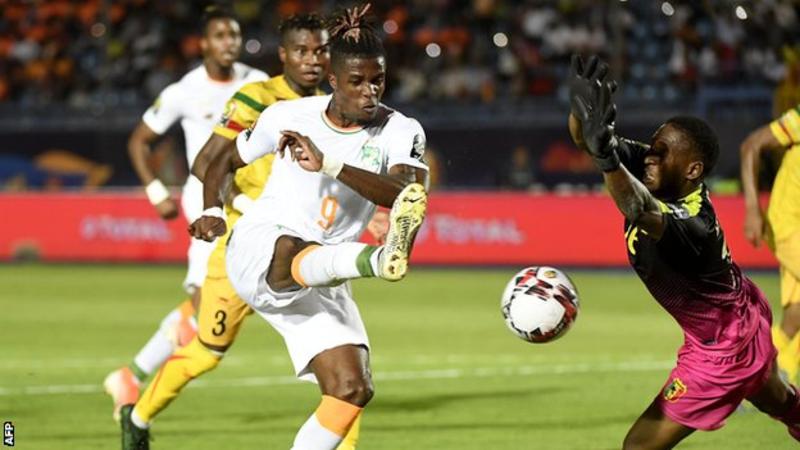 Wilfried Zaha scored the winner as the Ivory Coast beat Mali 1-0 to reach the Africa Cup of Nations quarter-finals.

The Crystal Palace forward, who has been linked with a summer move to Arsenal, raced on to Sylvain Gbohouo’s deep free-kick and got to the ball before Mali goalkeeper Djigui Diarra.

Mali had been wasteful with Moussa Marega and Moussa Djenepo both missing good opportunities when well placed.

The Ivory Coast play Algeria in the last eight on Thursday (17:00 BST).

The Elephants have won the competition twice – in 1992 and 2015 – but only advanced through this year’s opening phase as runners-up after losing 1-0 to group winners Morocco.

The Ivory Coast struggled in the first half against Group E winners Mali and failed to register a shot on target in the opening 45 minutes.

Mali’s Moussa Djenepo, who this summer moved to Southampton from Standard Liege, posed a constant threat on the left wing but Marega scuffed a good chance wide at the near post when he failed to connect properly.

Abdoulay Diaby also had a free-kick turned over the bar by Ivory Coast goalkeeper Gbohouo before Djenepo wasted a good chance when he was indecisive in front of goal.

The Ivory Coast came more into the game after the break with Aston Villa’s Jonathan Kodjia being denied by Diarra.

However, Diarra was beaten a few minutes later when Zaha, who had been quiet throughout the match, reacted quickest to score in the 76th minute and take his country into the last eight.

Mali were the second-youngest team in this Afcon, and their lack of experience cost them a ticket to the quarter-finals.

They missed far too many good chances to hope to win against a side like Ivory Coast – even on a day when they look as undercooked as this.

Mali had far more attempts on goal – some of which were far easier to score than somehow put wide – but nevertheless it is the Elephants who go through.

Ivory Coast though look deeply unconvincing. On this form, the team they really don’t want to meet is Algeria, who have been ruthless so far. But that is who they now face in Thursday’s quarter-final.