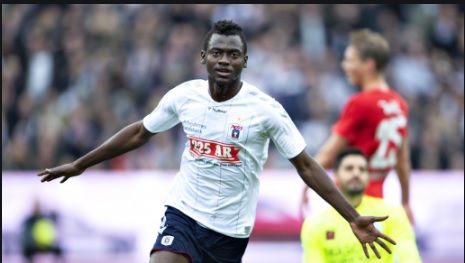 The news around Europe is the lanky Leone Stars 2019 inductee, who plays right across the offensive line, has been the target of four major European Clubs, Borussia Dortmund of Germany, newly promoted French Ligue 1 side Lorient, Turkish Giants Trabzonspor and favourites to clinch his signature, RSC Anderlecht of Belgium.

The former Hereford hero, who played 29 times for the English tier 5 team, scoring 26 goals, winning 3 trophies and reaching the vase final at Wembley, all in one season, was forced to leave the United Kingdom in 2016 as strict work restrictions meant he could not play for any team higher than the fifth league.

However, it was obvious from that year Mustapha Bundu had a great future. His move to AGF Aarhus in the Danish Super Liga, has helped him mature and develop and is about to sign for a regular European Union of Football Association (EUFA) Champions League team, RSC Anderlecht of Belgium.

If the transfer is completed, as expected, and barring any unforeseen circumstances, Mustapha will also enjoy being around his sponsor, and the man more than any other, who deserves all the accolades for his progression from a teenage sensation, with huge dreams, to the International star, Mr Craig Bellamy, the current under 21 coach at Anderlecht.

It was in 2010 when the Craig Bellamy Foundation was established and the 1st generation of players were recruited with Mustapha making the selected few.

A few years later Mustapha Bundu benefitted from a scholarship to Hartpury College in the UK, to further pursue his education and football career. He graduated in 2016 from the college, where he also left his mark scoring 18 goals in 6 outings in the Schools F.A. Cup.

The achievements of Mustapha Bundu in the last 4 years, is evidence of the raw talents in Sierra Leone, and why much more focus should be given to sports.

There are dozens of unnoticed and unidentified Mustapha Bundus in every corner of our passionate football nation, but with little or no opportunity to develop their talents and be exposed to the International stage.

It was unfortunate that the Bellamy Academy in Tombo was shut down, but significant that more investment is put into youth football particularly and sports in general.

With the advent of the National Sports Authority and a Presidential pledge of funding, one hopes the development of young sporting talents will be among the priorities in the immediate future.

As Mustapha Bundu is about to take the next step to greatness and an opportuntiy to surpass Sierra Leone’s greatest export ever, Mohamed Kallon, we will continue to pray for him, and keenly look forward to every minute and every game he plays, and all the goals he will score.

Good luck Mustapha, the sky is your limit. Make us prouder, for we are already proud of you!