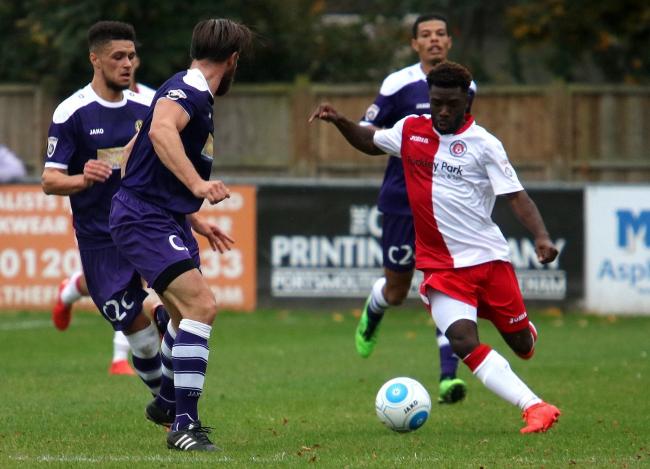 POOLE Town manager Tom Killick wants to give flying winger Abdulai Baggie a platform to force his way back into the professional ranks.

Baggie, who joined the Dolphins in March, made four appearances in their Southern League title-winning campaign and has featured 12 times in National South this season.

On the books of both Reading and Southampton as a youngster, he played more than 50 games in League One and League Two for Tranmere between 2012 and 2015.

Baggie started for Rovers in Eddie Howe’s first game back at Dean Court in October 2012 before coming off the bench when Cherries clinched promotion at Prenton Park six months later.

Capped by England at under-16 and under-17 level when he played alongside the likes of Jonjo Shelvey, Baggie has also played in World Cup qualifiers for Sierra Leone, the country of his birth.

Injured during Poole’s opening-day defeat at Ebbsfleet, Baggie was recalled for the win at Hungerford last month and also featured in the 1-1 draw with East Thurrock six days ago. And he netted his first goal for the club in their Dorset Senior Cup win over Shaftesbury on Tuesday.

The 24-year-old will be hoping to keep his place when Poole host National League high-fliers Chelmsford City at Tatnam tomorrow (3pm).

Boss Killick told the Daily Echo: “He is a technically gifted player and you can see why he has played a lot of league football.

“I have been pleased with him but I still think he can get better. He probably knows his ability would possibly warrant him showing even more and we are hoping that will come in time.

“There is a lot of blood and guts at this level and he is diminutive. He comes in for a lot of physical punishment because of his size and technical ability and, physically, he would suit a higher level.

“It is such a mismatch when you see him up against giant defenders but he has an awful lot of ability.

“It has been a bit of a stop-start season for him due to the injury he picked up in August.

“But we are hoping he can have a run of games and really show what he can do.

“He has played league football and he certainly didn’t scrape around for games when he was there.

“He did well and, rightly so, he will probably be hoping he can get himself back into a better level than we are playing at.”

Seventh-placed Poole will face another stern test against Chelmsford who are currently second and joint leading goalscorers in the division.

The Clarets reached the play-offs four times in five seasons between 2008 and 2013, losing each time in the semi-finals.

Killick added: “Chelmsford are widely thought to be one of the powerhouses in the league so we are expecting another difficult game but it should be an attractive game.

“They are one of the bigger teams in the league and we have tended to have performed better in these games.”