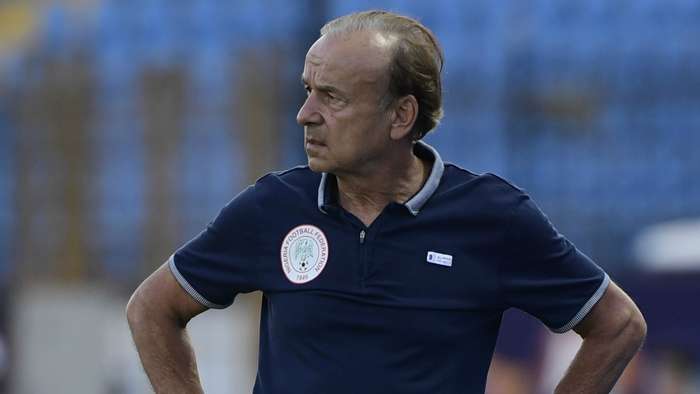 The German tactician failed to redress the disappointment of a capitulation at home, and may pay the ultimate price for his inflexibility

Of all the possible outcomes following the eight-goal extravaganza between the two sides last Friday, a goalless draw in the return leg in Freetown was perhaps the least expected.

Really though, it should not have come as a surprise.

After all, the Leone Stars have built up an impressive record of defiance on their own patch—even accounting for the fact one might, mischievously, choose to interpret the term literally. For their part, the Super Eagles had suffered a grievous blow to the ego, and were without talismanic striker Victor Osimhen for the trip. With that in mind, it was never likely to be another free-for-all.

Gernot Rohr’s approach to the return was to change as little as possible.

In came Kelechi Iheanacho to lead the line, as well as Ola Aina at left-back in place of Zaidu Sanusi, whose dereliction for two of Sierra Leone’s four goals in Benin City was met with the ultimate punishment. That seemed to suggest that, in his mind at least, his team’s second-half collapse was entirely mental, and that the set-up had been working perfectly otherwise. An optimistic read, to say the least.

Sierra Leone coach John Keister, however, was brave. He unfurled a different plan, beefing up midfield at the expense of a centre-back in order to better blanket the spaces Alex Iwobi revelled in the previous game.

Fortune favours the brave, as they say, and so even though Iheanacho blazed a presentable chance over the bar and had the ball in the back of the net in the second half (only to see his effort chalked off for offside), the hosts were eminently comfortable for the most part.

They might have even nicked it at the death, and it is a testament to their discipline and application that if they had, it would not have been a travesty.

Indeed, by the end, Rohr appeared to be calling a ceasefire. Gone was his first-choice midfield of Oghenekaro Etebo and Joe Aribo, with Shehu Abdullahi and Semi Ajayi on in their stead, and when he elected to discontinue the Kevin Akpoguma experiment at right-back, it was Chidozie Awaziem, rather than Sanusi or Ebuehi, who entered the fray.

It is impossible to shake the feeling this was a tacit acknowledgment, on the part of the German, of his own shortcoming. Over the course of the two legs, it is Keister who has emerged into the light with his reputation burnished.

So what does it all mean for Nigeria and Rohr?

Well, in basic terms, the result kept them top of the Group L table, a point better off than neighbours Benin, who could only draw on the road against Lesotho.

Strip away the acrid taste of disappointment and things remain very much in hand. The Super Eagles are now one win away from a place at the 2022 Africa Cup of Nations, and will back themselves to get it over the line.

However, a trip to Cotonou in March is a tricky proposition: fail to win that, and suddenly Nigeria could be in a three-way fight going into the final match of qualifying against Lesotho at home.

That, gloomy as it may read, is the ‘silver lining’ spin on this final set of internationals for 2020.

Rohr’s stock is now the lowest it has been since he came into the job in 2016.

All of the reservations about him – his inherent conservatism, his inability to interpret and influence the flow of matches, his logic-defying propensity for chimera-like mishmashes when it comes to selections – just seemed to crystallize in this window, over the course of two very different but similarly depressing outcomes.

The capitulation in Benin saw his competence questioned, not only by the bigwigs at the Nigeria Football Federation, but by an aide to the Sports minister. This meek, sloppy nothing of a response will have done him no favours as far as making amends goes.

It does feel now like this marriage – lately strained and only renewed earlier in the year as a matter of convenience – may well be on its last legs. If Rohr has anything going for him, it is that the sheer weight of the match schedule running up to the 2022 World Cup is much too brutal for the sort of upheaval sacking him would generate.

Also, in these Covid times, is a contract termination really the best use of stretched resources?

These considerations, however, might not be enough to save his neck ultimately. It may very well be that, by the time the Super Eagles convene again, it will be under new management. That, really, would be the most extreme of responses, but Rohr has shown beyond any meaningful doubt that he cannot be anything other than what he is; if the NFF evince a similar inflexibility in defenestrating him, it would be difficult to argue it is without cause.