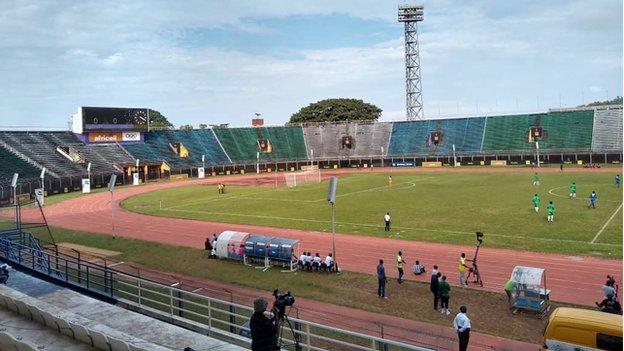 In the Group L game of the 2021 African Nations Cup qualifier Sierra Leone and Lesotho drew 1-1 as both sides finished with 10 men.

Iceland-based Kwame Quee scored for Sierra Leone in an empty stadium in the 69th minute to give the hosts the lead.

Then in the 83rd minute Lesotho captain Marepe Basia was dismissed for a second yellow card for foul play and then George Kweku Davies was shown a straight red for his retaliation.

The visitors then grabbed a point in the final minute of normal time through Thabantso Jane, despite the protests from the Sierra Leonean players.

The hosts felt Lesotho should have observed fair play and returned the ball to them after the Leone Stars keeper Solomon Zombo Morris had thrown the ball out of play to get medical attention .

In the other Group L game Nigeria had to come from behind in Uyo to edge past neighbours Benin 2-1.

Veteran forward Stephane Sessegnon scored the opener for the Squirrels after just three minutes as he took advantage of some poor defending to put the ball past Nigeria keeper Daniel Akpeyi.

The Super Eagles then came close on 40 minutes as Villareal’s Samuel Chukwueze hit the woodwork.

Nigeria drew level in injury time at the end of the first half when Victor Osimhen scored from the penalty spot to continue the form he has been enjoying at French side Lille, where he has scored nine goals this season.

The referee awarded the spot kick after a foul on Torino’s former Chelsea player Ola Aina.

Bordeaux’s Samuel Kalu sealed the win just past the hour mark as he dribbled into the area to score from close range.

Sierra Leone striker Kei Kamara has retired from international football with immediate effect because he is unhappy with issues relating to the national team.

The 35-year-old, who plays for MLS side Colorado Rapids, took the decision on the eve of Sierra Leone’s opening 2021 Africa Cup of Nations qualifier against Lesotho.

“I can confirm that I have retired from international football because I’m unhappy with the progress of national team,” Kamara told BBC Sport.

“I’ve been with national team since 2008 and there has been no improvement, no plan for the direction the national teams should go from the youth level to senior level.”

The former Norwich and Middlesbrough forward, who has now been replaced by locally-based player Sallieu Tarawallie, cited Tetteh as one of the reasons for his decision.

“Coach Tetteh is a good man and has good intentions. But he’s an old man who I do not believe is able to really improve us and to move us forward.” Kamara continued.

“Buya Turay, Mustapha Bundu are playing in top leagues around the world and we’re learning new things everyday when we are with our clubs but not with Sellas, with him it feels like we are going backwards.

“I put my ego aside and decided to come for the upcoming matches to work with Sellas because I want to see the growth of Sierra Leone football.

“We tried over and over to talk to him to work together with us the senior players in the team me and captain Umaru Bangura but he didn’t listen to us, he’s not doing the right things to help the players grow.”

Kamara also says he is not happy with the way the national team’s home-based players are treated.

“The [home-based] players were not in camp, so they don’t feed them, they just showed up in training every morning training for the Lesotho match without eating at home,” he explained.

“I took the decision for every national team player who is not treated right.

“This has been the case even before the days of Mohamed Kallon in the team, it has been the same complaint all the time, we’ve gone through the same thing for over 20 years nothing has changed.

“It hits me too hard because we the players are sacrificing too much on the pitch.”

Kamara, who is the fifth all-time leading goal scorer in MLS, was the first overseas-based player to join the home-based players in training to prepare for the Lesotho and Benin matches.

He was also in solidarity with the several locally-based players when they boycotted training last Saturday in protest for unpaid allowances which has been addressed.

The following day Kamara refused to train and left the team’s training ground because according him “I wasn’t in the right frame of mind,” and never returned again.

He said he had not intended to quit this week as he wanted to give himself a last chance of qualifying for the Nations Cup.

“I’ve received calls from ex-players asking me to reverse my decision but there’ll be no coming back, this is the end of my international career,” he concluded.

It is the second time that Kamara has called a halt to his international career after doing the same in October 2015, because he said national team players were not respected and treated fairly.

He has also had several other disagreements with the Sierra Leone Football Association that led to disciplinary suspensions from the national team.

Kamara made his debut for Leone Stars in a 2-0 defeat to Equatorial Guinea in Malabo in June 2008 and went on to make 29 appearances scoring five goals.