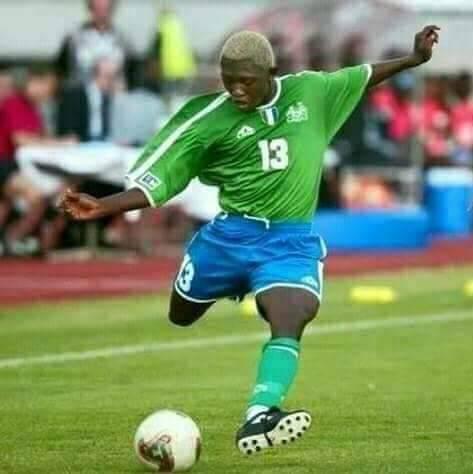 Former Sierra Leone under-17 star Emerson Samba has passed away at the age of 32 after a long illness.

Samba played in all three of Sierra Leone’s games at the 2003 Under-17 World Cup in Finland and while many of his team-mates absconded he returned home.

The attacking midfielder passed on in Kenema, in eastern Sierra Leone, after the mystery illness which left him confined to a wheelchair right until his death.

It also ended his playing career in 2015 when he first fell ill and soon after he spent nearly a year in hospital with an undiagnosed illness that left him paralysed.

Despite several call-ups he never made a appearance for the senior national team most of his club career was spent in Sierra Leone, where he played for Mighty Blackpool, Diamond Stars of Kono and his home town club Kamboi Eagles, helping them to win the 2014 FA Cup.

He also briefly played in Lebanon as well. (By Mohamed Fajah Barrie)

Below Article by Finnish magazine YLE News in 2012

Most of the squad that came to Finland in 2003 eventually managed to find a club outside Sierra Leone. One who didn’t is Emerson Samba, a midfielder from the east of the country. He is now playing for Kamboi Eagles, one of two teams in the country’s Premier League from the eastern town of Kenema.

When YLE News contacted him, he was pessimistic about football in his home country.

“We are playing football with no encouragement, low salaries….we are really suffering,â€ Samba sighs down a crackly phone line.”

Although a member of the ‘home-based’ national team, which is composed of players at Sierra Leonean clubs, his goal is to move abroad to further his careerâ€“like most of his colleagues in the Sierra Leone Premier League.

“We are training to get a contract to move out of Sierra Leone. That’s why we train very hard”

As the town of Kenema has little in the way of a functioning economy, that is unsurprising. According to Kieran Mitton, a Sierra Leone expert from King’s College London, traditional agriculture is no longer important to younger people in the region, as they tend to desire a more modern lifestyle.

In Sierra Leone, land title inheritance has broken down and people avoid their native villages, where war-time enemies might reside. In the aftermath of the war, many young people today still lack the skills and capital necessary to start an agricultural business even if they have the land. It is a world away from Finland, which Emerson left in 2003.

“In colonial days it used to be quite an important trading post,”says Mitton. “(It is) less developed than Freetown. As time went onand during the conflict in particularâ it became more of a hub for diamond training. If you go there now it is lined with shops run by middlemen, often Lebanese middlemen, selling diamonds.”

Businessmen from the Lebanese minority in Sierra Leone have historically played a crucial part in the country’s economic life. Samba’s agent, Ali El-Ali, is one of them. He is vague about what his main business is, but he says he is a merchant, owns a shop, and is involved in diamond dealing.

It would be easy to imagine that Emerson now regrets his decision to leave Finland, that he wishes he had stayed and claimed asylum instead. He had clearly considered his options in Finland, as he is adamant that he made the correct decision given all the available information.

“No! No! Because I had a contract,” says Emerson when asked if he has any regrets.

After the 2003 tournament, El-Ali organised a transfer to Cairo club Al-Ahly. The Egyptian side put him in their under-20 squad, but would not offer a professional contract because they said that at 17, he was too young.

Following that setback he moved to Lebanon, but injuries have slowed his development. He is now back in eastern Sierra Leone where El-Ali says he will ‘take care of him’ and ‘make sure he gets well’. Like Emerson, he is not optimistic about Sierra Leonian football.

â€œEverything is bad,â€ says El-Ali, adding that there are good players in the league, but they don’t have money or infrastructure.

Neither Emerson nor Ali wanted to discuss wages and finances in football. Thomas Durosimi, the country director for the Craig Bellamy Foundation academy in Sierra Leone, estimates that a few footballers in the country’s Premier League might earn a hundred dollars a month, and the rest have to find some other way to survive while training full-time in the hope of moving abroad.

Kamboi Eagles finished third in the Premier League this season, four points behind champions Port Authority. Emerson is in the squad to face Egypt in Freetown at the end of August, hoping to impress the scouts once more. At 24 years of age, the clock is ticking if he is to leave the country.

This is the third in a three-part summer series probing the fates of Sierra Leonean footballers who came to Finland for the 2003 under-17 World Championships.