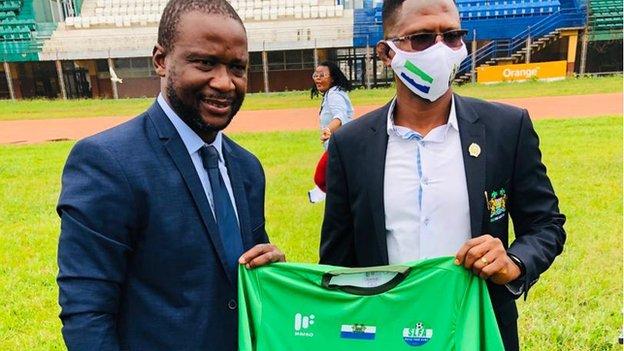 The former Sierra Leonean international was named coach of Leone Stars for a second time on Monday on a deal until 2023.

“It feels great to be back. I think what we’re going to look at now is transition which is my immediate goal,” Keister told BBC Sport Africa.

“We had a national team that have done well, but obviously ageing. So we’re bringing in a fresh group of players, that’s not to say I’m going to get rid of everyone in the last national team.

“But we need to fresh up things a little bit more compare to the last time I was in charge.

“Building a new national team is part of a massive transition Sierra Leone is going through.”

The Manchester-born former Walsall and Shrewsbury Town had a sometimes strained relationship with the Sierra Leone Football Association (SLFA) during his first stint as national coach.

Three months after his appointment in May 2017 he was suspended by the SLFA following a leaked recording of him apparently criticising its president Isha Johansen.

He was later reinstated and was only in charge of two official games in the 2019 Africa Cup of Nations before Sierra Leone was suspended from international football by Fifa.

The former midfielder, who was capped 16 times by Sierra Leone, says those issues are over and he has an unfinished job.

“I have a good relationship with the FA and president…things happen sometimes but we are good again,” he insisted.

“To be honest I think when I was there the first time I started a job that wasn’t probably quite finish.

“I have had an opportunity again to come in for the second time to try and see where we can get the country together.

“So again it’s a different feeling, the environment is better, we are all working together.”

He’ll be assisted by another former Sierra Leone international Amidu Karim, who was part of Leone Stars’ squads at both the 1994 and 1996 Nations Cup tournaments in Tunisia and South Africa respectively.

Keister is expected to quit his current coaching job with East End Lions, who he led to the 2019 Sierra Leone Premier League title without losing a game, as soon as he signs his contract with the SLFA.

The duo will already be looking to replace two veterans of the squad with Julius Gibrilla Woobay and former Norwich City forward Kei Kamara, who now plays for MLS side Colorado Rapids, as both have retired from the national team to pave way for younger players.

Sierra Leone are already out of the 2022 World Cup race so Keister will now focus on the qualifying matches for the next Nations Cup in Cameroon.

“I think qualification is part of my mandate but the main goal for now is about developing the transition,” he explained.

“I know we haven’t qualified for the Africa Cup of Nations for a long time. We’ll give it ago you never know what will happen. You never say never in football.

“If it doesn’t happen in 2022 in Cameroon then we look forward to 2023. I think it’ll be the appropriate time for us to achieve what we want in terms our transition.

The general secretary of the SLFA Christopher Kamara said they would like to see Keister building a sound team.

“We want to see us qualify for the Nations cup in Cameroon but we’re not putting Keister under pressure,” said Kamara.

“He has a three-year mandate, so we want him to build a sound team. We’re taking the development approach than participation approach.

“We want to build the same system of play for all the categories of national team, It’s part of a five year strategic plan.”

Sierra Leone are in Group L of the 2021 qualifiers alongside Nigeria, Lesotho and Benin.

They’ve already played two matches, drew with Lesotho at home 1-1 in an empty stadium, and lost away to Benin 1-0 and are third in the group.

Keister’s first game will be against the three times African champions Nigeria in Freetown, the match was supposed to have taken place since March but was postponed because of the outbreak the Covid-19 pandemic.

He had previously served as head coach of the Leone Stars home based team as well as the Sierra Leone under-17 and under-23 national teams.