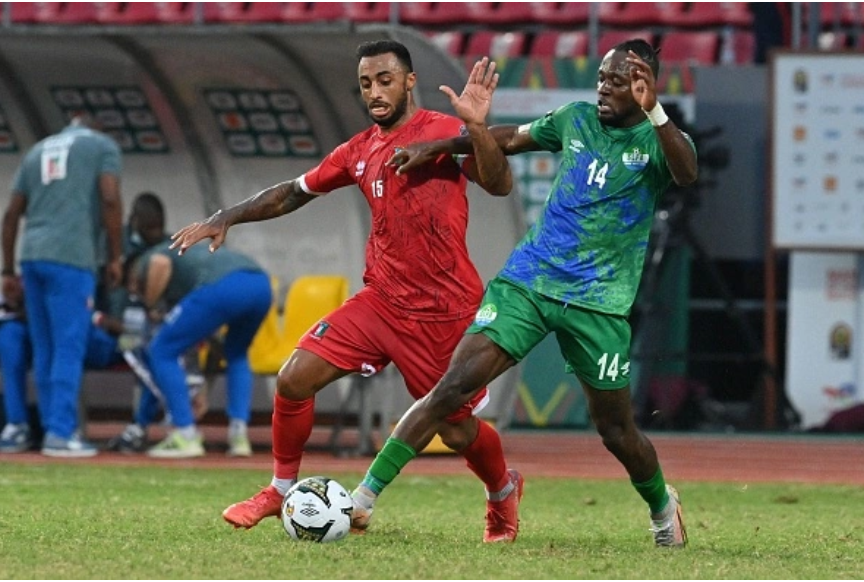 Sierra Leone have been knocked out of the Africa Cup of Nations (Afcon) in Cameroon after they lost 1-0 to Equatorial Guinea in Limbe on Thursday.

Leone Stars conceded a minute goal scored by Pablo Ganet Comitre in the first half in a match dominated by the Equatoguineans.

Kei Kamara failed to convert a late penalty in the second half to send Leone Stars to the round of 16 for the first time in Afcon history.

Nzalang Nacional (National Thunder) started the match strongly and finished it as the better side.

They created chances including a ball that was cleared off the goal line by Mustapha Bundu before they were rewarded in the 38th minute when Comitre curled in from the edge of the area to account for the only goal of the group E decider.

Sierra Leone who struggled to create chances in the first half try to regrouped in the second half as they brought in Mohamed Buya Turay, Alhaji Kamara and Issa Kallon.

They came very close to scoring when defender Steven Caulker headed a cross narrowly wide in the 61st minute before they were awarded a penalty by the Egyptian referee Mohamed Mansour after Kallon was brought down in the box.

The former Norwich City and Middlesbrough forward stepped forward to take penalty which was saved by the Equatorial Guinean goalie Owonu five minutes to full time.

Had Kamara scored, Sierra Leone would have advanced to the round of 16 because they needed just a point as Algeria were losing to Ivory Coast.

Leone Stars finished the match with ten men after Kwame Quee was red-carded for a second bookable offence in the 90th minute.

Equatorial Guinea had a near miss before Ivan Edu Salvador was brought down in the edge of the box in stoppages. But the referee had awarded a penalty before VAR overturned his decision and a free-kick was instead given.

Sierra Leone have now failed to go beyond the group stage of Afcon finals for the third time in their third appearance.

The victory takes Nzalang Nacional to the round of 16 after they finished second in group E behind Ivory Coast who knocked out defending champions Algeria with a 3-1 win in Douala.