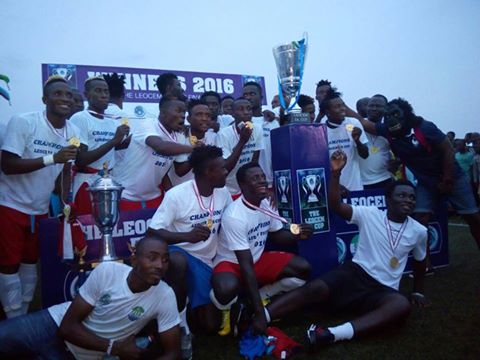 The Sierra Leone Football Association is hoping to revive the domestic league for the first time since the ebola epidemic forced its postponement.

The last edition of the Premier League was stopped midway through the season in 2014 because of the ebola threat.

Sierra Leone was declared ebola free by the World Health Organisation in March.

And the first domestic football competition – the FA Cup – was completed on Saturday, encouraging the SLFA to restart the league.

But while FC Johansen picked up their first silverware by beating Republic of Republic of Sierra Leone Armed Forces 1-0 in a replay final, the achievement was lessened by the absence from the competition of eight out of 14 Premier League teams.

They boycotted the FA Cup in protest at the continued infighting at the SLFA and there are fears they could adopt the same stance in regard to the league, which is intended to begin in three months.

While SLFA director of competitions Sorie Ibrahim Sesay told BBC Sport he is optimistic teams will participate, there are others who are less confident.

Blamoh Robert, the secretary general of FC Kallon said the team will only play the league if the SLFA executive committee convenes congress.

Robert told BBC Sport: “Our position still remain the same. The SLFA must respect the constitution by taking the membership to congress and address the issues affecting football.

“Then normalcy will prevail and the Sierra Leone Premier League will kick off.

“We, together with other Premier League clubs, didn’t take part in the FA Cup because the executive committee has refused to convene congress and we have no regret not playing the FA Cup.”

The same sentiments have been expressed by some of the other teams that boycotted the FA Cup.

The SLFA is, however, determined to go ahead with the league as has a plan to make up for any shortfall of clubs in the top flight.

“The executive committee of the SLFA has the power to bring in teams from the first division to fill in a gap to kick-start the league,” Sesay added.

“We would then call for a national first division play-offs to determine the teams that will be promoted to the Premier League.

“The promoted teams will be on the standby to replace clubs that may want to boycott the league.”

Earlier in 2016, a breakaway league was formed by 11 clubs and although the SLFA labelled the competition ‘illegal’ the governing body did nothing to stop it.

The clubs insisted that they would not to take part in any SLFA organised competition because the SLFA’s board had lost “legitimacy” for failing to convene congress.

But three of the 11 clubs later joined the remaining Premier League teams to take part in the FA Cup.