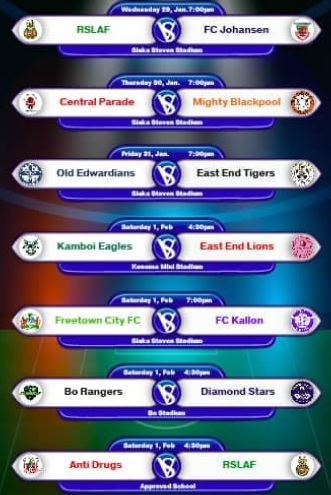 It’s Super Saturday in the Sierra Leone Premier League, with four sumptuous matches lined up to light up the weekend.

The piece de resistance or the pick of the bunch will be a mouthwatering clash in Kenema between this season’s imperious leaders Kamboi Eagles🦅 and last season’s epic champions East-End Lions.🦁

Lions relish the prospects of a back-to-back title triumph, but The Eagles in their Kamboi forest nest will be aiming to blunt the rediscovered sharp claws of the Lions and to continue to soar above or over the rest in the table .

Two provincial teams in Bo Rangers and Diamond Stars lock horns in a battle of supremacy. Bo Rangers are winless in three consecutive matches, and there will be no more excuses from Coach Konneh when his star-studded team square up the challenge of the sparkling gem boys under the tutelage of Coach Zappa Koroma.

Anti Drugs will be hoping to continue their sublime and terrific run of form when they entertain RSLAF. The Soldiers have struggled to get out of their trenches and to fire on all cylinders, but they are on a mission to restore morale and to capture a decent spot in the table . Death before dishonour!

In the vesper or under the floodlights kickoff at the National Stadium , uninspiring City Council will be hoping to upset bloodless FC Kallon