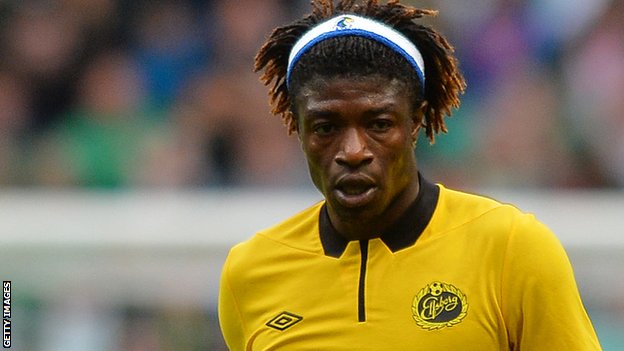 BBC Sport understands that the transfer fee is around US$1.1 million.

The 26-year old former Celtic player is happy with the move despite playing second tier football outside Europe.

“It is a good deal and it presents Bangura with a good future.

“He loves challenges and he wants to go there and help Dalian win.

“He also wants to be part of the football revolution in the China with a growing population for football.”

Bangura scored eight goals in the Swedish league last season which ended on the last day of October as he helped AIK Stockholm to finish third.

Four other Sierra Leoneans have played in China Mohamed Kallon, Mamadu Alphajor Bah and Gibril Sankoh who now plays in the Netherlands for Roda JC.

The 2011 Sierra Leonean player of the year returned to AIK a year ago after spells with the Scottish champions Celtic, Turkish club Istanbul BB and former Swedish champions IF Elfsborg.

A series of injuries kept Bangura out of action for long periods before he decided to go back to AIK in a bid to resurrect his career.