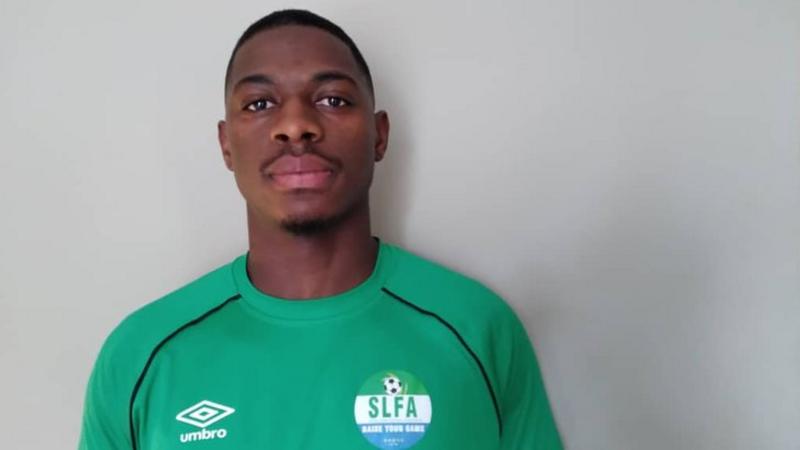 Sullay Kaikai says appearing consistently for Blackpool for the last two seasons has allowed him to commit to playing international football for Sierra Leone.

The 25-year-old former Crystal Palace player is now set for a debut for the Leone Stars in their crucial Africa Cup of Nations qualifier against Benin on 14 June.

Kaikai, who was born in London to Sierra Leonean parents, is set to leave Blackpool when his contract ends later this month after featuring overall 58 times in League One netting 11 goals since joining the club in 2019.

“I feel like the timing is right now,” Kaikai told BBC Sport Africa.

“I’m at a good age, I have been looking forward to it, but it’s just about the timing. I feel like the timing is right now.”

He told BBC Sport Africa that he has already received offers from several clubs and he hopes to join a team before the start of the new season.

Kaikai has recovered from a hamstring injury that meant he missed the climax to Blackpool’s season which saw them promoted to the second-tier of English football via the play-offs with a win over Lincoln City at Wembley.

He explains that the Sierra Leone coach John Keister and the country’s football association have kept in touch with him about his availability for the Leone Stars.

“I have been in contact with the Leone Stars manager for the last year or so consistently,” he continued.

“And even before that to be fair like here and there I have been speaking with the national team but like I said it’s just about time, I feel now the time is right so I feel like that’s the main factor. That was what motivated me to come.”

He says he has been following Leone Stars closely and hopes he can help them qualify for the Nations Cup finals for the first time in 25 years.

“For about a good three to four years I have been following the national team,” he added..

“I’m looking forward to making my international debut against Benin. It’ll be a dream come true to play for your country

“Qualifying for the Nations cup it’s something I hope and pray for. The more players that can come and play for the national team the better.

“You know we need to make the national team stronger so that we can start qualifying regularly for this kind of tournament.

However Kaikai, who is also eligible to play for England, is honest about his aspiration to play for the country of his birth when he was a youngster.

“Being born in England you know you have the dream of playing for England when you see them making the World Cup and the Euros, You want to play in those tournaments,” he admitted.

“So as a youngster that is one of the aims but as you grow up you kind of see where you are in your career and you have to be realistic, for me England is unrealistic now so I feel it is a good choice to play for my country.”

Leone Stars coach John Keister has also included another England-born player in his squad – 21-year-old Idris Kanu who plays for Peterborough United, who finished just above Blackpool to earn automatic promotion to the Championship.

“I’m happy to have Kaikai and Kanu in the squad,” the coach said.

“I’ve personally been trying to get Sullay now for a while because I felt he was a young boy with lots of potential. Obviously now he’s showing that and we wanted those potentials coming to the national team.

“What he brings is lots of competitions, a lot of enthusiasm. He gives us a better squad, a good bench, pace that we need, and also he gives us youth and something that’s very different going forward.”

“What we’re trying to do is we are building a very youthful side for the future. Idris Kanu too is a player with good potential.”

Keister also admitted that he and the SLFA are hoping to persuade more players to commit to Sierra Leone.

“We’re trying to talk to a few other players as well,” he said.

“I have said that the national team is in transition, I’m trying to do it, the experienced players have been there with us with patience going to through a final game.”