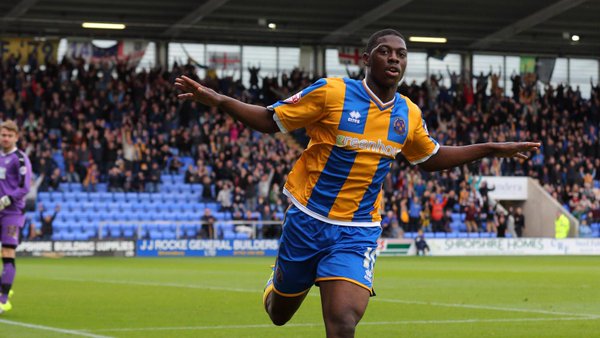 Sierra Leonean forward Sullay Kaikai netted a goal for Shrewsbury Town in their 2-2 home draw with Scunthorpe United  in the English League one on Saturday.

The 20-year old got the opening goal of the game to register his second goal of the season as he was on target against Coventry City last Tuesday.

Kaikai returned to Shrewsbury Town on loan last month from Crystal Palace and has so far played three games in the ongoing English third tier league.

He scored five goals in 14 appearances in his first spell with Shrewsbury.

Kaikai who is also an English citizen but very keen to play for Sierra Leone was named the 2014 Sierra Leone Football.com/Globalkall young player of the year.

He was born in London to parents hailing from Sierra Leone.