The Ghanaian influence on Sierra Leone football in the 80s 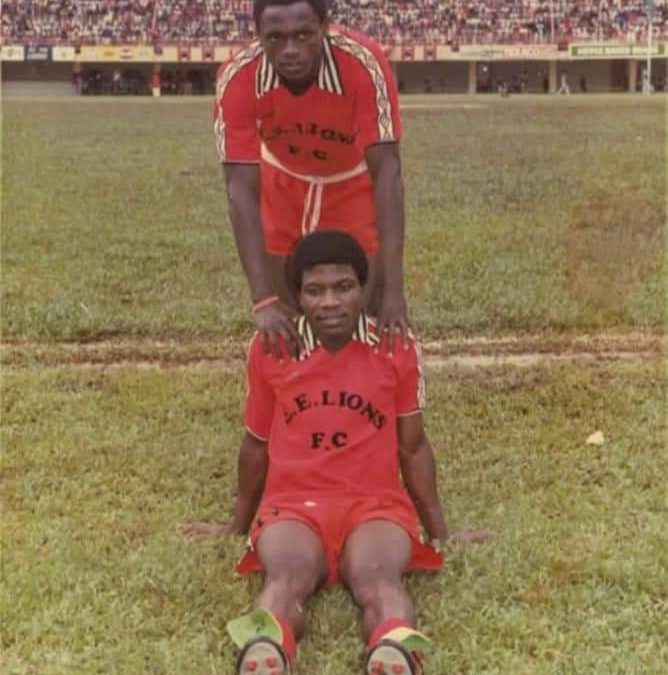 The history of Sierra Leone football can’t be written without mentioning the role Ghanaian players played to help develop the country’s most loved sport. The decision of many Ghanaians to travel to Freetown in the early 1980s has had an indelible impact upon Sierra Leonean football. Their presence helped a lot to improve the country’s national league and even the quality of football. Thanks to the instability in Ghana at the time as a result of economic hardship and unstable government.

The history of the importation of Ghanaian talents into Sierra Leone started in 1980, thanks largely to a series of friendly matches organised in Freetown to commemorate the 50th year anniversary of the country’s most popular club East End Lions.

Lions first invited a club from Liberia Invincible Eleven for a series of friendly matches and were able to snatch three Ghanaian players in the team who were impressive. They were midfielder Kofi N’ti (Dead), striker Ben Morthy (Dead) and goalkeeper Colins Fargo. The trio became the first set of Ghanaian players to ply their trade in Sierra Leone. Kofi N’ti and Ben Morthy settled down to winning the hearts of the Lions fans. But Fargo’s stay was brief because he was deported for involving a pitch battle albeit Lions officials at the time believed that it happened through the machination of highly placed officials of a rival club.

Lions, the 1980 champions subsequently invited two Ghanaian clubs Ashante Kotoko of Kumasi and Dumas, a textile printing company’s team and the convincing performances of both teams paved the way for mass exodus of Ghanaian players to Sierra Leone.

Both teams stole the hearts of spectators with good passing football and the encounter between the two Ghanaian sides turned out to be a cracker, the most talked about and the best of all the golden jubilee series.

Players of two teams including Atto Mensah (Dumas) and Philip Buckman (Kotoko) were impressive and the 2-2 result reflected the performances of both sides. Smith Eshun and Atto Mensah netted for Dumas while Anthony Appiah accounted for Kototo’s goals with the best player of their series Kofi Badu providing the assist for the second goal.

For Kotoko it was an exciting finish to a successful tour as they had defeated East End Lions 4-2, Real Republicans 1-0 and Bai Bureh Warriors of Port Loko 6-4 before facing Dumas.  Bai Bureh Warriors replaced the league champions at the time Mighty Blackpool who wanted Le 5,000 before they played their opening game against Asante Kotoko. As for Dumas it was a promising start to their tour as they went on to wallop Ports Authority 4-0 after clashing with both Real Republicans and East End Lions.

The impressive performances of players of the two Ghanaian sides forced several Sierra Leonean clubs to go player hunting in the West African country after the golden jubilee anniversary matches had ended.  The bulk of the Dumas players were brought to Freetown to continue plying their trade. East End Lions were the first to go to Ghana in March 1980 to sign Atto Mensah and goalie Thomas Jacops (Dead)- both from Dumas, Philip Buckman (Dead) from Asante Kotoko and Simon Awuah from Hearts of Oak.

The quartet created an immediate impact by helping  ‘The Killers’ to win their first ever national first division league (now premier league) title with Awuah scoring that famous 90th minute winning goal against Real Republicans in the final decisive game of the season in 1980. The four players were later joined by fellow countryman Thomas Ampumah from Sekondi Eleven Wise. Mensah and Awuah formed a deadly striking partnership to terrorise the defense of opponent teams. Both became household names in Sierra Leone because of their constant impressive performances on the pitch, and together with Buckman they won the league again in 1985, Lions’ second national league title.

Mensah was popular for his dribbling skills and was rated as one of the best players of all times in the history of Sierra Leonean football. He was the only Ghanaian player who naturalised and won about six caps with the Sierra Leonean national team, Leone Stars including two against Nigeria in the qualifiers of the 1988 African Nations Cup. Four years before he naturalised Mensah together with two other Ghanaians Evans Effu and Francis Arhin known as Bongoman had represented Sierra Leone in the Amilcar Cabral Zone II football tournament in Mauritania but weren’t officially counted as caps. Philip Buckman who died in Freetown in 2005 was known for his defending prowess and famous for a wonderful save he made in a league match. The ball was volleyed and was about to enter the net when he acrobatically jumped very high to save the ball with his head and in the process he hit his head on the post and crashed to the ground.

Republicans went for four Dumas players Derrick Boison (Dead), Adrew Hooper, Ismail Lamptey and goalkeeper Adu Nipa as well as coach Atakuma (Dead).  Sierra Fisheries contracted Francis ‘Bongoman Arhin, one of my favourite Ghanaian players, George Mantey and goalkeeper Jonathan Opata alias ‘I fit catch it’ (Dead), Evans Efu and Wallace Addy- all from Dumas. These footballers played their roles well for the two sister’s teams to win five league titles between them from 1981 to 1984, and represented the clubs in continental clubs competitions. The Fisheries Ghanaian players were part of the famous squad that eliminated Mauritania’s AS Police 4-1 on aggregate, Enugu Rangers of Nigeria 2-0 on aggregate in the preliminary and first round stages respectively of the defunct African club champions cup now CAF Champions League in 1983 to become the first Sierra Leonean side to eliminate a team in the competition and reach the second round stage where they were narrowly knocked out 2-1 on aggregate by Zaire’s Bilima who had a great player called Mayele.

Ports Authority too imported four Dumas players Emmanuel Otto known for his flying kicks in central defense (Dead), Latifu Amadu (Dead), Dennis Okine and Ben Tetteh Fio who later moved to Mighty Blackpool as well as other Ghanians Kwame Abator, George Alhassan who featured in just one match, a 5-2 loss to Lions, Pascka, and two goalkeepers with the same first name Joseph, one joined the ‘Waterfront boys’ after the other had moved to Kamboi Eagles. They also had a Ghanaian coach called Enede who won for the Freetown based club their second FA Cup title, and Super Cup in 1991.

Bai Bureh Warriors with the late former vice president of Sierra Leone Sorie Ibrahim Koroma in firm control of the Port Loko based club were able to import Nii Amoah (Dead), Dennis Afotey, Joe Baiden and Dickson Owusu in 1981 but before that they had Solomon Jokoto, Francis Atysi and Coleman. Afotey is the only Ghanian remained in Sierra Leone after hanging is boot as he currently lives in Waterloo.

Diamond Stars went for goalkeeper Nana Kofi, Issah, Jackson, Alimu and Coach Usman (Dead). There were other Ghanaian players I may have skipped in this piece.

Note: I first wrote an article on how Ghanaian players helped improve the standard of Sierra Leone football in the 1980s for a Ghanaian newspaper The Ball fifteen years ago when Thomas Ampomah was appointed as coach of East End Lions.