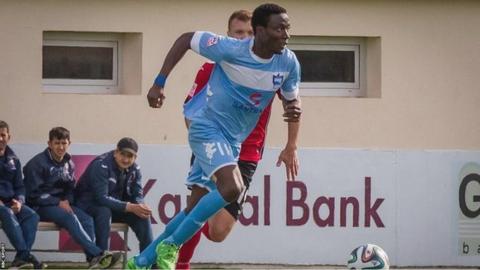 Nigeria-born Victor Kayode insists he has not given up hope of playing for Sierra Leone, despite being continuously overlooked for selection.

The Azerbaijan-based midfielder, who was born in Ondo state to Nigerian parents, decided to play for Leone Stars four years ago – claiming his maternal grandfather was from Sierra Leone.

Since doubts over Kayode’s eligibility were removed, five different coaches have taken charge of Sierra Leone, but he is still awaiting his first call-up.

“I’m not given up as I still want to play for Sierra Leone,” Kayode told BBC Sport.

The player, who turns 30 in September, came close to making his debut for Sierra Leone when he travelled with Leone Stars to Monastir to face Tunisia in October 2012.

But he failed to make Leone Stars’ final 18-man squad for the decisive 2013 Africa Cup of Nations qualifying match which ended goalless, a result that eliminated Sierra Leone.

“I never regret my decision to play for Sierra Leone despite the fact I’m yet to make my debut and I’m looking forward to being given the chance,” said Kayode.

“I’m not frustrated, there is time for everything,” he added.

Kayode who currently plays for Azerbaijan top flight league club Zire FC believes he has what it takes to play for Sierra Leone and urges the current Leone Stars coach Sellas Tetteh to follow his performances at club level.

“I’m a regular in my team and I’m doing well. That is what many coaches look for,” Kayode added.

“I think if the Leone Stars coach wants me he can check my records and he’ll see that I’m qualified and ready to play.

“However, I hope to personally introduce myself and ask him to give me a chance.”

Kayode says his decision to choose Sierra Leone over Nigeria was not taken because he knew his chances to play for the Super Eagles may be very slim.

“That was never the case. Nigeria are a big country and not everyone can play for his country of birth.

“I’ve chosen Sierra Leone because I believe God wanted me to play for the country of my maternal grandfather,” he insisted.

He trained with Leone Stars ahead of World Cup and Nations Cup qualifiers that same year and was considered for Sierra Leone after impressing Mattsson.

Kayode has only played club football in Azerbaijan where he has featured for four clubs since he moved there a decade ago.