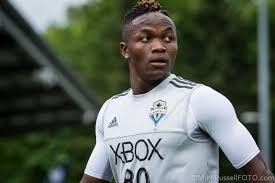 Victor Mansaray, the Seattle Sounders fourth ever Homegrown Player, is open to playing for Sierra Leone if they come calling. The 20-year-old has been a member of the Sounders since midway between the 2012-2013 seasons when he joined the Sounders Academy.

Mansaray only has three appearances for the senior team and has been loaned to FC Cincinnati for the 2017 season. He played his previous two years with S2 and made 35 appearances and scored five goals.

“I’m only 20 and I’ve made up my mind to come back home and play if called upon, I’ve been making progress every year, and I have come a long way since joining the Sounders academy midway through the 2012–2013 seasons.”

He would be eligible to play for Sierra Leone because he was born and raised in Tengbeh Town in Freetown, Sierra Leone.

Mansaray has represented the United States at various youth international levels such as the U18s and most recently with the U20s during the Dallas Cup in early March 2016.